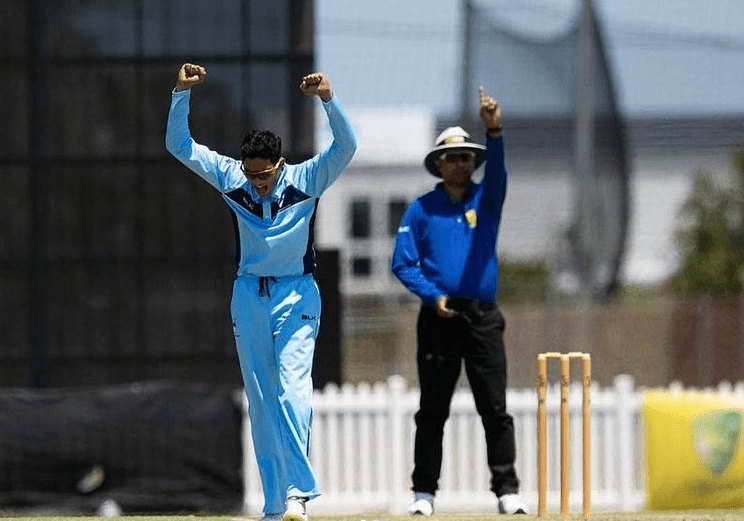 Nivethan Radhakrishnan, the young 18-year-old ambidextrous bowler from Tamil Nadu who played in the TNPL, has made his way into Tasmania set up, where he will rub shoulders with Australian Test captain Tim Paine.

Born in Chennai, and having relocated to Australia when he was 10, Nivvi (as his friends and teammates call him) isn’t a new face in the Australian cricket circuit. He had represented the Australia Under-16. Recently, he also had impressed the Delhi Capitals, who added him to their net bowler contingent.

At DC, He bowled in the nets to big names like Steve Smith, Marcus Stoinis, and Shimron Hetmyer among others. He even, on an occasion, batted in the nets under the watchful eyes of Australian legend and Delhi Capitals coach Ricky Ponting. He will now join Tasmania on a rookie contract for the coming summer.

We at Penbugs had a chat with him discussing his journey into the Tasmania Team.

1-Tell us a little bit about your parents and how you ended up playing in both countries?

My dad’s name is K.R.Anbuselvan and my mum’s name is Hemavathy; Dad’s known as Radha here in Australia interestingly! I was born in Chennai, lived in the U.S as a toddler, and moved back to Chennai in 2007. In 2013, we (dad, mum, older brother — Nikethan/Nikki and me) moved to Sydney purely for my cricketing future. Until the Covid pandemic, I returned to Chennai and a few other cities every Aussie winter (April-July) to play cricket and see my grandparents!

2- Since both places are completely different when it comes to the training and everything, how do you adapt?

I would describe myself as a hybrid cricketer as I’ve never conformed to a certain way of playing cricket. My arsenal incorporates techniques and attitudes from my roots back in India, and my current home in Australia. Due to the regular visits to India to play, the requirement for constant change is always there and it’s become my biggest strength. Whether it’s drinking more water because of the higher temperatures or using my feet more decisively against spin on the turning wickets, my mind and body have the methods ingrained.

3- Since you are ambidextrous when it comes to bowling, how do you decide when you have to use your dominant arm or otherwise?

I’m naturally right-handed but as far as my bowling goes, I’m equally adept with both arms; a purely ambidextrous bowler without one arm more dominant. The plans and tactics are aplenty and encompass so many parameters like the condition of the pitch, the direction of the breeze, and even the type of batsman facing. There are more factors as well, all of which help decide what I bowl every ball.

4- This ambidextrous thing became sort of your identity, right? how do you see that considering, you are really good with the bat too?

It’s one of the few maybe-negatives about my ambidexterity taking the spotlight! People don’t forget, but It’s hard to see my opening batting skill as catchy to the eye as my bowling skills. Other cricketers and cricket personalities see my batting with as much value, if not more, than my bowling. But to the general public, it’s always “the kid who bowls with both hands”. I’m hoping my future performances and corresponding selections shed more light on my batting skill too, as I’m a pure no.1 batter!

5- Your experience with Kaalais and now, you were along with the Delhi Capitals team. Tell us about it.

I was 14 when I toured in my first TNPL experience, with the Kaalais. I rubbed shoulders with some big names within Tamil Nadu and learned a lot being a lot younger then too! This recent experience with DC was far higher in the standard of cricket and the people involved. I was challenged every time I bowled/batted and could see and be a part of the level of cricket I want to play as soon as possible! But wow, the professionalism and skill that these international stars have, it’s mind-boggling!

6- Getting into Tasmania means, you’ll rub shoulders with some of the biggest Australian stars, how do you feel about it?

Not many people get to play state cricket or have a coffee/play on the PS4 with the Australian captain, but I do! Along with the massive opportunities I have here in Tasmania to achieve what I’ve dreamt of, the Baggy Green, the dedication and quality of the senior players has been outstanding. Stars like Paine and Wade are jolly and cool to hang around with, whilst carrying a treasure heap of knowledge. Hopefully, I can utilize all the awesome things I have here for me and create a legacy!