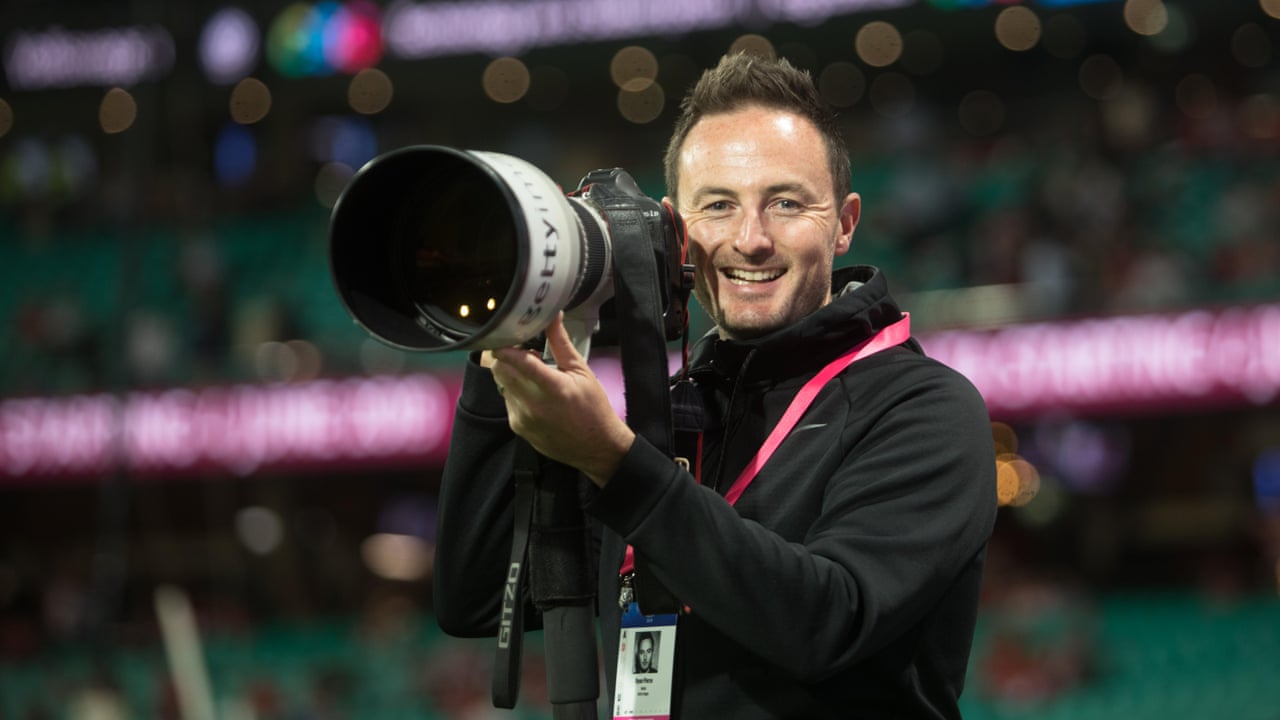 We all love sports. We watch it for the joy of it and carry the emotions we undergo as memories. How do we retain it – picturesque memory. To relive those moments and cherish it, we go through the photographs and video footages. It’s the sports photographers and camerapersons who make sure that we are able to do that.

Ryan Pierse – Chief Photographer at Getty Images – is one of the top sports photographers in the world. Based out from Melbourne, he joined the organisation in 2004 as a staff photographer. Over the last 16 years, he has covered all kinds of sporting events and created magic with his photographs. The events he covered include a couple of Olympics, FIFA World Cup, Wimbledon, Australian Open, French Open, Formula One, Asian Games and so on. Since 2013, he has been covering cricket full time and is now the Chief Photographer at Getty Images.

Known for his profiling and experimental approach towards portraits, Ryan Pierse has won a number of awards over the years. Canon AIPP Australian Professional Photography Awards, 1st Place, Portfolio of the Year, Getty Images APAC (2012), Nikon Walkley Awards, Finalist, Sports Photography (2011), and 1st Place, Australian Football League (AFL) Best Action Photograph (2005) to name a few. Pierse’s photograph’s give the fans an inside view of a player and their emotions. The kind of emotions that goes out of the frame in a broadcasting coverage.

We at Penbugs tried to get in touch with him to talk about his journey as a sports photographer and the nuances of it. Ryan was happy to share his experiences and we are sure that the readers will get a fair share of insights both from a fan and a photographer’s perspective.

Here are the excerpts from the interview

What is your motive when you click pictures? Do you click for the buyers of the pictures, or is it your intent?

Initially, you have to cover the ‘bread and butter’ shots that our clients expect daily from the Getty Images coverage. You need to cover all the news angles from each event along with solid action and feature shots. Once you have captured those, it’s time to get creative and produce something different that will surprise customers and set us apart from our competitors at the same event.

Sports photography has always been a beautiful art to portray spontaneity. But, your pictures get very personal. What made you change from the latter to what you are now?

After working as a sports photographer for over 20 years, today it’s more about creating a set of pictures to tell a story. You still have to make sure you capture the big moments such as wickets, catches and celebrations, but these moments become second nature to cover off. The challenge is capturing emotive shots in the quieter moments or taking advantage of relationships with the players and the team to capture behind the scenes material to allow the viewer into the minds of the players.

Reporting a game or documenting a moment? What’s more important for you?

Both are equally important. As a Getty Images photographer, you have to do both every time you cover an event, especially with Test Cricket as the days are long. You need to take images that tell a story of the test match while making sure you nail all the big moments.

You’ve been constantly experimenting with lights and shadows since the Ashes 2019. Is getting out of the ground to shoot portraits a part of your reviving skills?

I’ve been working like this for quite a while. I like to discover interesting and different walls or textured surfaces wherever I’m working. Add in a cricketer and some nice light, and you can produce something special out of nothing. I regularly take notice of subject’s surprised reactions when I tell them what I’m thinking about a shot or a background. I guess you need a certain eye to know when something is going to work or not. You just need the subjects to trust your judgement and know that the images will really stand out from the standard sports portraits that are doing the rounds.

There was a lot of tonal shift when you shot both the teams in Pakistan’s tour of Australia in 2019 game. Especially, in the portrait of Babar Azam, what was going through your mind when you were photographing?

I would love to say I put lots of thought into the picture of Babar. The truth is, I ended up having to shoot five players individually, plus two team shots in the space of 90 minutes. I just had to pick a few places within the Gabba that were close to each other but looked completely different at the same time. In the time that you get access to the players, you need to work and think fast and constantly push to make something out of nothing.

Which was the game that challenged you the most recently? If every game is a new challenge, then what’s the most challenging frame to capture in a game?

I would say the Australia v New Zealand Test in December at the new Optus Stadium, Perth. I really look forward to my trips to Perth, but the heat in recent years has made working there very difficult. We had five straight days of 40 degrees Celsius or above. This is problematic as it keeps crowds away, and even the people who are there are sitting undercover in the shade. This creates messy and ugly backgrounds with empty seats. On top of that, most laptops don’t work too well at temperatures over 30 degrees Celsius.  So, you need to move inside to transmit your photos. You also have your personal welfare to consider as there is nowhere to hide in the furnace that is Optus Stadium. Our Getty Images team regularly took breaks to shoot from the stands in the shade rather than being stuck on the boundary rope all day.

The most challenging times are when the pitch is flat, and there may only be one or two wickets taken for the day. This is where the patience of an experienced cricket photographer will shine through. It can be so easy to get distracted for just one ball, but that could be the only wicket ball for the day. It’s safe to say that anyone who covers enough Test cricket will know only to relax when the players have left the field.

Photographically, the principles are still the same. That’s where the similarities stop. There are very different ways of working at Sports and Entertainment events from access restrictions, the times you need to arrive to claim a good spot, the lighting conditions, and the sheer difference in the numbers of photographers you are competing against.

I really enjoy shooting entertainment, fashion and news as it’s completely out of my comfort zone and constantly challenges me. I think it’s very easy to get stale shooting too much of the same thing, so I’m lucky to have the opportunity at Getty Images to be assigned to some pretty cool assignments throughout the year that forces me to think outside the square and reinvent yourself over and over.

Every photographer has a story behind a monochrome picture. You’ve been clicking a lot of B&W lately. What’s the story behind those shades of grey?

You’ve been a staff photographer for Getty images since 2004. How has your photography career evolved since then?

I began my career shooting mostly Aussie Rules Football (AFL) before branching out to cover many different sports. It wasn’t until 2013 that I committed to covering cricket on a more permanent basis. It was around this time that I also started to branch out into portraiture, news and entertainment photography. This period was not long after I had a four-year stint with Getty Images out of our London office where I learnt so much from working alongside some of the best editorial photographers in the world.

The biggest change I’ve seen my 16 years at Getty Images is the speed in which our clients expect pictures to be transmitted to them. We now literally edit and send pictures as soon as they are taken so they can be on picture desks and websites anywhere in the world in around 60 seconds.

Note- We would like to thank Varun Sekar, a budding photographer and a Journalism student for his insights in framing the questionnaire. The readers can check his photographs at his Instagram profile.