For the past two days, the #PrayForNesamani hashtag is going viral on Social Media, thanks to the person who started it.

For the uninitiated, it all started because of a comment by an overenthusiastic Vadivelu fan on a Pakistan meme page which shared a picture of a hammer and asked what it is called in your country. 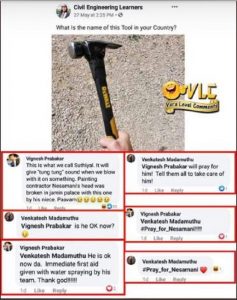 Since then there were many netizens who started talking about it and made the hashtag trend on Twitter.

Now, talking to TNM, actor Vadivelu said that he has no idea about it.

He said: “I have no idea what is happening. I haven’t seen anything yet.”

When informed about what is happening in the Social Media right now, the actor replied: “What? It has become famous across the world? Oh god. It has gone to America and everywhere? Thank you,” he says, addressing his fans now. “Yes, the movie was with Vijay and Suriya. I have acted in a lot of movies and made the whole world laugh. But I didn’t know about this.”

The actor said to Pudhiya Thalaimurai channel that he is blessed and happy to have made people laugh and character like Naesamani is a God-given gift to his career.

I badly wish he gets back to the cinema and does more roles like Naesamani that is making us all laugh even today. Tamil Cinema is badly missing someone like him.

Mafia removed from Amazon Prime due to insensitive usage of photographs

Rayane names her daughter after her mother Radhikaa

Sidharth Malhotra to Star in Hindi Remake of Thadam