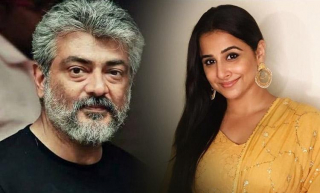 Actress Vidya Balan to make her Kollywood debut with the ‘Pink’ remake and will be pair with Thala Ajith.

The ‘Thala 59’ which is the remake of the Hindi blockbuster Pink will see Shraddha Srinath reprising the role of Taapsee Pannu, Kirti Kulhari’s role will be done by Abhirami Venkatachalam while Andrea Tariang will reprise her Hindi role in Tamil too. Also, the role of three friends will be done by Adhik Ravi, Ashwin Rao and Arjun Chidambaram.

Backrolled by Boney Kapoor and directed by H. Vinoth, the movie will see Ajith playing recreating the role of Amitabh Bachchan. Rangaraj Pandey will be seen in an important role as well.