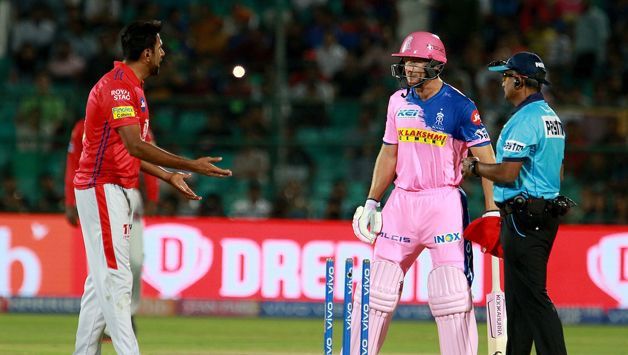 IPL is all about entertainment and at Jaipur, we got one as Jos Buttler became the first victim for the Mankading in IPL. The opponent team’s captain Ravi Ashwin was the executor of the dismissal.

What Exactly Happened?
Chasing 185, Buttler was holding the hosts Rajasthan’s innings with a good 69 off 45 deliveries and everything seemed under control until Ashwin came into bowl his spell. Ashwin walked forward stopped bowling and waited for seconds before taking the stumps off. Buttler, who was at that end, didn’t realize that Ashwin was actually ‘Mankaded’ him. When he realized it was late and going by the rules, the third umpire dismissed Buttler. A visibly furious Buttler exchanged a few words before leaving the field, and after his dismissal, Rajasthan saw a brutal collapse as they ended up on the losing side. In fact, after the match, Buttler avoided shaking hands with Ashwin.

Why it is called Mankading?
The dismissal was named after the Indian bowler Vinoo Mankad who ran out Australia’s Bill Brown after he’d had backed up too far at the non-striker’s end. This did raise many eyebrows before the laws could be introduced.

So, Mankading is right?

Going by the laws of cricket, it is. Mankading is legal, and the non-striker batsman is fully responsible for the dismissal.

According to the law,

If the non-striker is out of his/her ground from the moment the ball comes into play to the instant when the bowler would normally have been expected to release the ball, the bowler is permitted to attempt to run him/her out. Whether the attempt is successful or not, the ball shall not count as one in the over.

If the bowler fails in an attempt to run out the non-striker, the umpire shall call and signal Dead ball as soon as possible. And in 2017, MCC added that it’s completely batsman’s fault.

Ashwin is right if we are going by the laws. If we are arguing that this is disgraceful, I don’t understand why because following the laws should never make one “disgraceful”.

If we are talking about “Spirit of Cricket” here and if you think that he must have warned Buttler before, I don’t think if a bowler oversteps he is left alone with just a warning. Also, while playing the game, one must be aware of the rules and must play accordingly. It was Buttler’s fault for not watching the bowler which he should have done. Ashwin did give seconds for Buttler to react, but unfortunately, he didn’t look at Ashwin at all.

Every player approaches the game differently. At the end of the day, winning the trophy has to be one’s aim. He must have lost the ‘fair play award’ points, but sure these two points will help them to make a tiny movement forward.
Yes, “spirit of cricket” is definitely important and that makes the players legends, but hey, we aren’t talking about ‘Sandpaper incident’ here, which is illegal while Mankading isn’t, and it’s in rules. Following the rules shouldn’t make one feel less.

Still, some part of me would have wanted Ashwin to warn Buttler before getting him out. Guess, We all must accept the fact that it’s in rules and we all must move on.

It will be interesting to see if we are going to witness a lot of Mankading in the coming matches. At least today will be a sheer warning for the batsmen and considering the fact that the cricket is inclining towards the batsmen, dismissals like these which help the bowlers, help the game as well.

Ashwin on the incident: “No real argument to that (Mankading incident) and it’s pretty instinctive,” Ashwin said during the post-match presentation ceremony. “I actually didn’t load and he left the crease. That’s always been my take on it because it’s my half of the crease. I was not even at the crease, he wasn’t even looking at me and he just left the place. We ended on the right side of the coin, but I definitely think that those are game-changing moments.”

Also, if Ashwin was trying to be deliberate and wait until Buttler gets out of his crease, it wasn’t him who actually decided the wicket, it was the third umpire’s decision. If he thinks it’s out, it is out. The case ends there. There have been instances where players appealed for one-pitch catches deliberately and bat-pad LBWs.

Even in the recently concluded series against Australia, we had wrong DRS and the third umpire gave it out. If we can accept that, we must accept this too.

Previous Mankading dismissals by Indians:
Among Indians, it was Kapil Dev who had mankaded Peter Kirsten of South Africa during the 1992-93 series and in Indian domestic cricket Railways’ spinner, Murali Karthik had mankaded Sandipan Das 0.