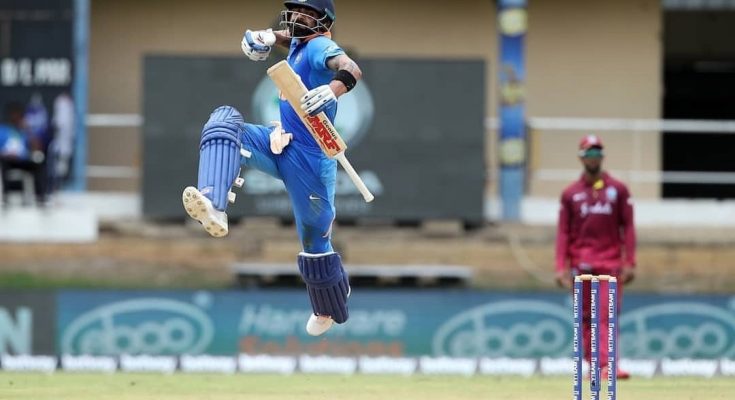 It was coming. The entire world saw that coming. In fact, for every missed opportunity, people were getting anxious. But he didn’t. He wasn’t perturbed by all the talk that was going around. Well at least, he didn’t let us know that.

It wasn’t normal for us to see Virat Kohli go through a World Cup without scoring a century. In the previous two editions, he started the tournament with a century. Here he was, going on record saying that Rohit Sharma is the best white-ball player at the moment, as the latter scored five centuries in the recently concluded WorldCup.

As a captain, he had to say that. After all, no one has praised Rohit more than Virat in that dressing room. But the batsman in him must have been fuming to get past that 100 run mark. When the announcement came about Kohli playing the limited over series in West Indies, the drought was expected to end. “Virat-the batsman” had to wait for another opportunity, as the first One Day International got washed out.

Virat Kohli came in at 2-1 after Sheldon Cotrell removed Shikhar Dhawan. Right from the very first ball, he was middling it. Kemar Roach pushed a full-length delivery on the fourth stump line. Kohli made his forward press and a slight shuffle across to get to the pitch off the ball and drove it through the covers. That ball had Virat Kohli written all over it.

That shot told us that it was his day today. Virat was in his zone. The partnership he had with Rohit was a display of a craftsman. Rohit scored only 18 in the 74 run partnership with Kohli. Virat was playing shots like he was batting in the nets. He got to his fifty in no time. It was only after Rohit got out, Kohli started to pace his innings. It was a Virat Kohli masterclass for the two youngsters who bat next and to the entire world.

Whenever the West Indian bowlers bowled just outside off stump, he used his wrists to manoeuver the strike, through mid-on and mid-wicket region. When it was pitched on the stumps, he used his bottom hand flick to get those boundaries on the leg side. The moment it was short, he pulled it. When it was wide outside off stump, he used the pace to get boundaries off the third man region.

And finally, that moment did arrive. Virat Kohli was elated. He jumped in the air, punched in delight and celebrated his 42nd ODI century. It was visible that he was missing that feeling of removing his helmet and raising his bat to the pavilion and the crowd.

Post hundred, he was just trying to up the run rate by scoring boundaries. There was a good length delivery which he drove over long-off for a flat-six and it traveled 80 meters. He continued to score boundaries before eventually getting out trying to slog a leg cutter over midwicket.

It wasn’t easy to bat. The pitch was dry and the ball wasn’t coming on nicely to the bat. Conditions were hot and humid. Virat was using wet towels around his neck and kept changing them. But he looked unperturbed by all of it. Nothing else mattered to him than batting and scoring runs.

This inning was a conversation between “Virat Kohli-the batsman” and his captain. It felt like the former was reminding his captain about who is the best batsman in the World by tapping on his name on the back of his t-shirt. It definitely has anything to do with Rohit Sharma. This century was all about proving to himself and doing what he loves to do. And with this century, our lives are back to normal.

Thank you, Virat Kohli, for bringing life back to normalcy!