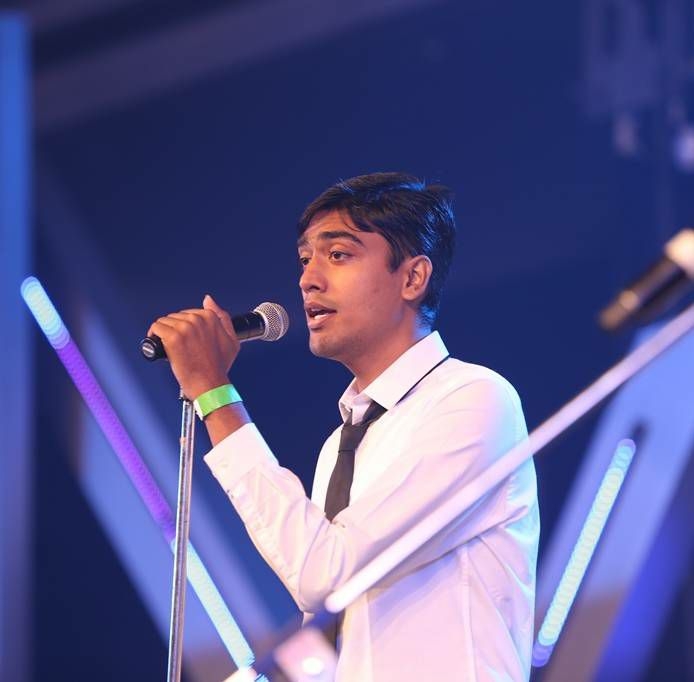 Covers are always tricky. More often, you end up badly because of the legacy of the original song. If we are talking about the artists who have done justice to the original, Vishnu Ram’s works definitely are one of the best you’d see. His originals do ring in our hears, his mesmerising voice carries the song–with stand-out lyrics– well.

Penbugs caught up with Vishnu Ram as he reveals more details about himself.

Born and brought up in Dindigul, Vishnu Ram used to sing from his childhood but didn’t the opportunity to be trained properly. Halfway through his Engineering when he was confused about what he wanted in life, he chose both. For the past 2.5 years, he is learning music professionally now. He thanks Chennai for giving the confidence.

“Now I’m doing ads, originals, covers, shorts, live shows and YouTubing and parallelly working in an IT firm to support it.”

When asked about how he juggles between the work and singing, he says that he is fortunate to have the right shift in the office which helps him to concentrate on both.

“One of my shift starts at 5.30 in the morning and ends at 2.30 in the noon. I make the most whenever I’m on this shift. I do my recordings after I get home until I sleep, in my minimalistic setup that I have at home. A Mic and an audio interface.”

Talking about the idea of doing covers to the hit songs from various languages, he says AR Rahman’s songs, especially, Jodha Akbar influenced him.

“I love Rahman and I listen to the dubbed songs of Rahman that came in Hindi, especially Jodha Akbar. That had an influence and I wrote few songs in Tamil while studying college, ‘Yeh Dooriyan’ from Love Aaj Kal was one such. While we started our YouTube channel, there was already a trend of doing Hindi songs in Tamil. Channa Mereya was viral at that time. That was the first time I met My music producer Kevin and Lyricist Prahal for a different song and we decided to do a cover real quick and release it the same day. The quickest bet was doing an existing song without much modification and that was Ae Dil Hai Mushkil title track.
Prahal wrote the lyric in 10 mins and we recorded the song the next hour and within 3 hours we had that first song for the channel. It’s an extremely creative fortunate accident. Also, there has to be a standout point for the audience to distinguish us from the crowd on YouTube. While other successful YouTubers were either music producers themselves or a part of the band I didn’t have both. The most viable thing I could is to do a song from other languages without a lot of modifications. This enables me to maintain consistency to an extent.”

‘Inkem Inkem’ was one of his best and it went viral within days. I even remember hearing it in a marriage and I could only feel proud because of the reach it had. Talking about the same, Vishnu Ram reveals how the song went viral.

“If I remember correctly we didn’t even have 1000 subscribers before Inkem Inkem Tamil version. The major part of the success goes to my lyricist Prahal, by the time the song ended its run, we were close to 20K subscribers and it is still the second-highest performing video of our channel. Inkem Inkem was spreading like a wildfire in YouTube and I happen to watch a Tamil version of the song that was so badly written and sung, and yet had a Million views. That’s when we identified the vacuum of a good replacement for that and went for it.

We got so many appreciations for that song, even Tamil FMs from Dubai/emirates were playing our version there and they are still playing it regularly. Its reach is what gave us the address on YouTube.
If Inkem Inkem gave us the push, our other cover Maate Vinadhuga Tamil which is our top performer and also is hitting a million views this month solidified it and took us beyond 30K subs. We currently stand at 36K + subs as we speak.

To stand out from millions of YouTube covers, definitely, it’s a great achievement. As his subscribers are increasing, we asked his originals as well.

We love doing covers because it’s the most viable way to reach and connect with the audience. We are not big stars, and if we do originals straight away, we are afraid that it might be lost in the huge star-studded YouTube crowd. So we did/doing a lot of covers, we were trying to understand what the audience wants from us and found a little niche and finally, the audience is responding to us.

I’ve done originals for other composers, but we are now ready to release our in-house originals composed by Kevin and written by Prahal and sung by me. Audio is ready we are in pre-production stages for the video production. Hopefully, we will release at least 2 originals by this year in our channel.”

This pushes to ask a question about what are the struggles an independent artist has to go through.

“In a way, there is no one to guide us on how to pitch ourselves and get us going further and further, we certainly lack that framework.
We don’t have the network yet which we’ll figure out shortly as we figured out other things ourselves. We sometimes lose inspiration due to lack of motivation and support and we talk and talk again to motivate and bring ourselves back on the track.
Our reach is very much limited because of the logistics issues we have in video production and promotions. We are not really a big team.
Initially, a 3 member team and now we’re trying out more lyricists to add flavours, other than that it is all 3 of us.

I have a DSLR with me with which we shoot our videos. My friend Elavarasan, my composer Kevin, my Lyricist Prahal and my wife Nivetha were most of the times my cinematographers and I edit the music videos myself most of the time.

We did try to do better, but it is hard to do it regularly as the budget would be overwhelming and we didn’t even have that kind of technicians and resources around.
It’s very hard to find enthusiastic individuals with consistency, they are rare species. We are constantly trying to do one better than the previous one.”

The road definitely is not smooth but it takes a lot to come to the place where he is now. Talking about his future projects…

“Currently, I have finished recording an original for Composer Pravin Mani sir, a long term associate of AR Rahman, written by Navin B. We are currently in the process of shooting the original which will be releasing in YouTube in a month or two.

I have also recorded 2 more originals for our channel, a peppy number and a folk melody. Composed by Kevin and written by Prahal which will be releasing later this year.”

We wish Vishnu Ram all success ahead. Do follow his works here.

Don’t let anybody tell you that you are inferior: Salesh Dipak Fernando