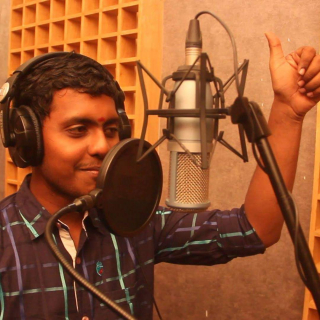 n recent times, the independent artists and independent music India by storm. With so many artists around, not many make and not many get recognition. Here’s Santhosh Ram, Ubique Canetis.

– I sat down to talk Santhosh Ram. Tell us about yourself-

I was born in Trichy and brought up in Chennai. Music has been an integral part of my life since my childhood days. Amma is very fond of music, especially into Carnatic and she put me into classes. Earlier I was learning from Ms Anantha Lakshmi Chella mam, a retired music teacher in KV. And then Mr.Arjun Menon taught me Carnatic music and some very basic western music theory as well.

– Your band name, Ubique Canetis sounds different. I’m super curious to know what does it mean?

Ubique Canetis is actually the name of our record label. Its Latin word meaning “Sound Everywhere”. The sound is present everywhere by some means. And we wanted our sounds to be heard everywhere. So the name Ubique Canetis.

–Great. I’m sure it will. So, How does your latest Album, Vellai Kaagitham formed? Any background story?

A person who has tried his level best to succeed in life but failure keeps pushing him back, and the depression out of this is sounding as “Vellai Kagidham”.

And, I definitely have to mention about the musicians who have worked on this.

Lyrics was penned by Ms. Harini Subramani. She is one promising lyricist to be frank. This is the third time we are working with her and we are looking forward to work with her in future as well.

Synth Programming and arrangements were done by Mr Shajith Humyun. He is an Alumni of Muzik Lounge School of Audio Technology run by Mr Stephen Devassy and Mr Sam Devassy. He is also my dearest brother. We have been working together ever since I started composing.

Music Production and Rhythm programming was done by Mr Ashwin Vinayagamoorthy. He is an upcoming music director. He is the music director for the recently released film “Vidhi Madhi Ultaa” and the yet to release movie “Yadhumaagi Nindrai”. He is right now working on a few more movies as well. To me, he is one among my best friends and I know him since my school days. He is definitely a promising talent.

Mixing and Mastering were done by Mr Sivanesh Natarajan. He is one among the amazing Sound Engineers I have known. He was a student of Mr R K Sundar who works for Mr Santhosh Narayanan.

And every sound layer that is heard on the song was created at Shimmr studios, Chennai. Its a world class studio with some super cool facilities. And it is also one among the very few studios where you can get your sounds mixed with analogue gears.

“I created my opportunities and didn’t wait for it”, says Alfred

I decided to risk to do something different: Divyaa, Shlokapreneur

“Life will take you where you are exactly supposed to go”, says Ramya Christina