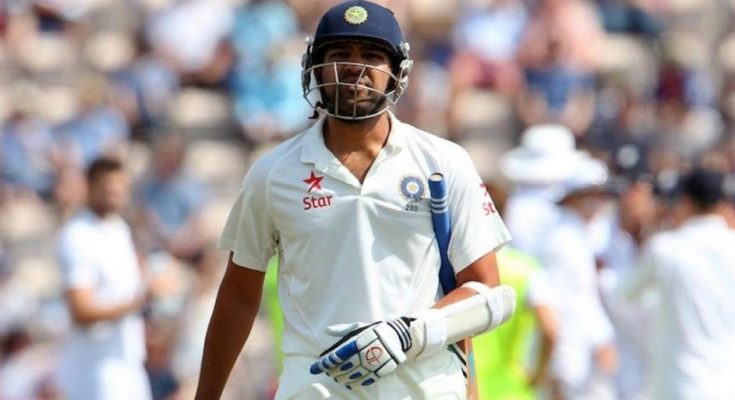 November 05, 2013. It was the beginning of the end. The farewell series of Sachin Tendulkar. I have no words to put out the emotion I have for him. But it was a beginning for someone too. Yes. Rohit Sharma was making his Test debut. Finally, Rohit in whites is happening three years after he injured himself in Nagpur.

I don’t know about Rohit, but I was anxious as hell. Badly wanted him to do well, get a big score and seal the vacant spot in the middle order. India was 82-4. Rohit walked in at the fall of Sachin. Pin drop silence engulfed the stadium as everybody wanted Sachin to score a century in his last series. For me, Sachin going out and Rohit walking in was like a baton passed on.

83-5. Virat Kohli got out and MS Dhoni joined Rohit. He struck a partnership with Dhoni and another huge one with Ravi Ashwin. Rohit scored a big century on debut. For me, it was a transformation of love from Sachin to Rohit in Test cricket.

Rohit will go on to make another century in the final Test. Rohit promoted to number five position, as Kohli moved up to the batting position of Sachin. And a long road of away tour began.

The first Test in Johannesburg, Dale Steyn ran in hard. The score was 113-3. Rohit has to build a partnership with Kohli. There he was, sledging Dale Steyn. Me going, “What are you doing?, Don’t do this. You are firing up the best bowler of this generation.” Almost everyone remembers that spell Steyn bowled for Deccan Chargers in 2012 IPL against Mumbai. Yet, he is sledging Steyn now at his forte. Rohit failed. Philander removed him inviting for a flashy drive. It was Kallis in the second innings. Steyn knocked him off when Rohit left a straight delivery off him in the second Test.

I convinced myself and argued with friends. It was his first tour abroad. Meanwhile, Kohli got a century and a ninety. Rahane made a valiant 96. Kohli ain’t no threat. I was fearing that Rahane might take over and Rohit will be left out. Rohit had to get a big score in New Zealand.

Rohit scored 72 in the first innings at Auckland. Inside edge on to the stumps of Trent Boult. Second innings, chasing 407 Rohit came in at 222-3. I thought it was a perfect scenario for him to be the hero. Well, Rohit had other ideas. Southee just had to bowl a probing outswinger outside off-stump and Rohit did the rest. A couple of low scores in the next match for Rohit, as Rahane got his maiden hundred.

It was obvious to me that Rahane will be preferred over Rohit in England. And he deserved it too. I was hoping that Rohit could bat at six. Then came the tactic of playing five bowlers. Rohit was dropped. It was a hard pill to swallow, but Rohit didn’t help his case. The third Test, Rohit got to play and he lofts Moeen Ali to mid-off and gets out. Dhoni went back to five bowlers strategy. Again, Rohit was dropped.

Rohit scored his second ODI double century in November. In the merit of form and back foot play, he was in the Test squad. I had high hopes on this tour. It could well be the turning point. Again Rohit had other ideas. Poor shot selection in Adelaide and Brisbane led to drop in Melbourne. Dhoni retired and Kohli brought Rohit back in Sydney. This time at number three for Pujara.

Knowing that it was only a matter of time before Pujara gets a big one, I wanted Rohit to score big. He had a couple of half-centuries in Sri Lanka. Pujara played an extraordinary inning and carried his bat in the series decider at Colombo. Rohit had failed in crunch moments. He was batting at number five in order to protect him from the new ball. Still, he couldn’t get a big score.

In the South Arica series, Rohit Sharma didn’t capitalize on a couple of opportunities he got. In West Indies, he played only two innings and didn’t do much there. Most of the matches, Kohli preferred to play five bowlers and Rohit was kept out of the eleven.

It was my argument always. He never got a consistent run in a fixed batting position. The team management changed his position every time he failed. He was also in the squad. It meant that he wasn’t available for domestic first-class matches.

Rohit scored half-centuries in all three matches against New Zealand at home. I was happy as hell. ” Yay Rohit! Come on! Get that one big century off your back and prove it to them”, I was telling to Rohit on TV. It never happened. He got injured again and was out for another six months.

Rohit missed nine Test matches at home when he was in good form. By the meantime, Karun Nayar made a triple hundred batting at number six. Rohit cannot walk into the team straight away. It has been the life of a Rohit Sharma fan.

He didn’t get to play in Srilanka. When Sri Lanka visited us in late 2017, Rohit was again selected based his limited over form. And finally, that moment came.

Rohit scored a century in Nagpur Test. It was his third century and he hadn’t scored any in the past four years. A monkey off the back for us. He scored back to back half-centuries in the next match macking a case for South Africa tour.

It was absurd to play Rohit over Rahane in the first Test. As much as I hated that decision, deep down I wanted Rohit to do well and seal the spot for him. Like always, it never happened. Rahane played a match-winning contribution in the last match.

It was almost curtains for Rohit in whites. I couldn’t accept it by heart. In my mind, I knew it was the right decision, as it is unfair on all those youngsters scoring tons of runs in domestic cricket. And very rightly, he wasn’t picked for the England tour.

Kohli had other ideas though. He brought Rohit for the Australia tour purely based on reputation. Rohit failed in the first match and scored a half-century in the second. He left the tour midway to see his newborn child.

As much as I argue about the long run for Rohit, it is the way he got out every time he got a start made me pull my hair. He comes down and lofts against spin bowlers. He chases a wide delivery outside off stump, pulls straight to square-leg and so on.

I am done with Rohit in Tests. It is not fair to pick him based on reputation when the young players toil hard in domestic cricket. Let’s get over with Rohit and bring someone in who deserves to be in the squad.

At the same time, I tell myself that Mike Hussey made his Test debut at the age of 30 and went on to have a successful career. Now might be the turning point of his career. Rohit Sharma might be picked over Rahane again in West Indies and prove that he is worthy of it.

Maybe. Maybe, he won’t. It’s hard for us to watch him fail. Ain’t got choice, because we love him.