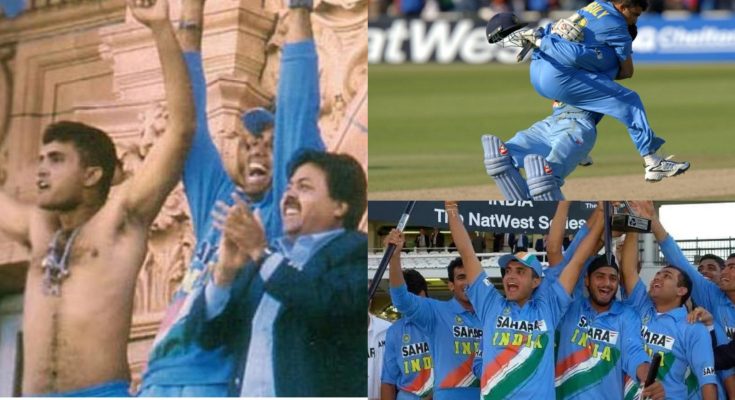 A six-match ODI series was under India’s belt till the 4th ODI as the hosts were leading 3-1. Come the 5th ODI. India went on to lose the match by two runs. 3-2 now.

February 3, 2002, it was. India took on England at the very famous Wankhede. India was chasing 255, and at the end of 37th over, India was 191 for 3. Dada, who was trying to play a match-winning knock, fell after scoring 80. Needing only 64 in 13 overs with wickets in hands, the match belonged to India until they got back to their famous collapse age.

India lost 8 wickets and Nasser Hussain threw the ball to Andrew Flintoff and he had to defend 11 runs from six balls, and he did. India fell five runs short of England’s total. After dismissing Srinath, Flintoff took off his shirt and ran around with joy.

At the other end, there was Dada who looked disappointed and sad, had his hands on his eyes and went back to the dressing room with pain. It was hurting him, caused a lot of pain. The sight of Flintoff running around was a nightmare, and it not only made Dada sad but also, it was hurting his ego. Dada wanted to give him back. He wanted revenge. He was fuming inside. During the presentation ceremony, Dada had tears in his eyes. He was feeling like a criminal standing before billions of people for letting go of the match. He couldn’t take it up. He wanted to show the English men that Flintoff cannot get away like that. He knew his moment would come.

July 13 2002. It was the final of the Natwest series. India was there play there, taking on England.

Opting to bat first, Trescothick and Hussain smashed ton to take the team to 325.

It was a shocker for India and what followed was some brutal hitting by Dada who made 60 off 43 with Sehwag making 45 off 49, but it wasn’t the day of Dravid and Tendulkar. India was then pushed to 146 for 5. Enter Kaif.

While all the batters struggled to bat on this surface, Kaif was playing it with ease and alongside Yuvraj Singh, he created a record partnership and Yuvraj got out for 69. Kaif then had a partnership in the name of Harbhajan Singh who had only one job that was to stay not-out, run when Kaif wanted to, defend, take singles at times. He did his job very well as India moved to 314 from 267. After Harbhajan fell, Kumble followed him with a duck. Fortunate for India Zaheer knew to bat a bit too. 12 runs were needed from 13 balls, then it went down to 6 runs off 7 balls. Kaif was on strike and he swung the bat to hit the ball straight but to his luck, the ball kissed the edge and ran away for a boundary.

Zaheer Khan defended a full-toss, tried to pick up a single to give the strike to Kaif but a direct-hit attempt resulted in the overthrow and helped India to win the match.

In seconds, Dada did something that would change history forever. He hadn’t moved on from that day. The revenge served. Dada took off his shirt at the Lords’. He then came running to Kaif, jumped over him with joy, hugged him and Dravid had to interfere to pull Dada off Kaif. It was emotional. It was history. Something that would give us all goosebumps even today.

***
If you are new to cricket, you’d never know the impact this game had on the Indian cricket. India was a choker when it comes to chasing especially on the bigger stages.

From 1996 to 1999, They were heavily depended on Tendulkar when it came to chasing. In that three year-span, India managed to pull off 35 victories while chasing out of 80 matches, and in that, Sachin managed to play 58 innings, scored 2839 runs at an average of 58. In the 29 winning chases he played, He averaged 96.

Between 1999 to that July 2002, India lost nine successive finals and was choking big time. This innings changed the phase of the game, showed the world that India belonged to the top level too. This game made the players believe in themselves. This match changed the thought of “Sachin out, switch off the tv”.

Most importantly, this is the match where India learnt to chase well. No matter what, this moment will always stay with us.