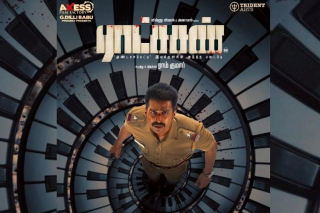 I loved Mundasupatti and I was happy to see the same hero and the director join hands for another movie. Though I didn’t want to pay to watch the same script like Mundasupatti, a small part of me was think differently.

I saw the trailer of Ratchasan and was eager enough to catch the movie on the screen. In the trailer, I was informed that Arun (Vishnu Vishal) was a cop in the trailer. I found the transformation from a filmmaker to cop both interesting and convincing ( which a lot of people might not like). Guess, the struggle which Arun (Vishnu Vishal) went through to find a producer in the movie was the same the director had to go through in his life.

I did like this particular scene where Arun throws his script and his research papers about serial killers into the beach but the waves bring them back to him. It was like telling him that even though he threw them away, the research papers will come in handy for him.

Vishnu Vishal, as a sub-inspector looks great. Of course, he grew up watching his dad. The love story between him and Amala Paul was realistic as well. Once again, this is a “typical” Tamil cinema movie where the heroine is used only for Duet-duties, but you cannot blame the director for this because of the script. I, especially, loved Munishkanth’s acting in the movie.

Coming to the crew, a lot of credits must be given to the music director Gibran for his wonderful music which did keep me at the edge of my seat. Kudos to the editor and the cinematographer as well.

I did love the way how the director did not have comedy tracks to stay true to the genre, to maintain the seriousness of the movie. It did work out for me. There wasn’t even a trace of Mundasupatti in this movie. Also, it can be seen that the director has put in a lot of efforts in working on the script.

Yes, a lot of scenes I can relate to various serial killer movies, but still, on the whole, I had a great time watching the movie. I was served for what I paid. At the end of the day, that is what you need from a movie, right? 🙂