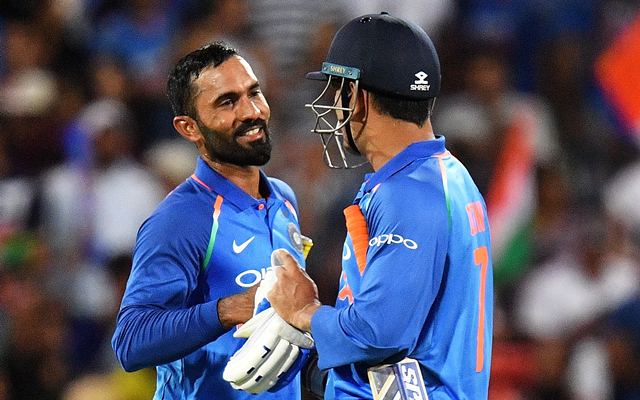 The Indian World Cup squad was announced recently and the selectors opted for Dinesh Karthik over Rishabh Pant.

Speaking to the journalists on Tuesday, Dinesh Karthik said:
“In this World Cup when it comes to MS Dhoni, I am like that small first-aid kit that goes along with him; you know that ‘Band-Aid’ for that small injury.”

“But I also know that I could have an opportunity to bat at No 4 and be the finisher. And post the IPL (Indian Premier League), I would be preparing every day believing that it could happen. I know I can play that role because I have done that before.”

He added that he thought the World Cup berth would be his in 2017 during one of his many comebacks to the international team.
“That is when I believed if I do something special, I could be part of this amazing team.”

He got to know about the selection at lunch on Monday with wife Dipika Pallikal-Karthik and KKR CEO Venky Mysore. “My father-in-law called Dipika, that is how I first got to know. Then my parents called,” said Karthik.

According to Karthik, it was his resilience — “my belief over a period of time that I could come back into the India team,” he said — that got him in the 15. Not an easy to do in a nation that, according to Karthik, is obsessed with novelty; somebody new, somebody young is always the flavour of the season.

Talking about Vijay Shankar’s inclusion, he said he is happy that he will have someone with whom he can talk in Tamil and go for Idli and Dosa happily.

My real goal is to win 2023 World Cup for the team: Sreesanth