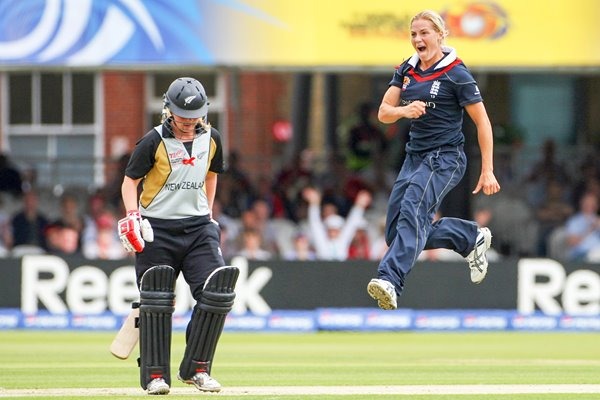 Facing Katherine Brunt is one thing. Facing black-eyed Brunt is another. The second is like entering hell in a cell match only that you already know the result. The same happened here as well.

Laura Marsh gave the best opening act to Brunt’s show where she took only five deliveries to make Suzie Bates fall for her magic. The latter walked down to send one out but the delivery barely reached her. You don’t do something with Taylor behind you, right?

Brunt’s extra pace proved extra costly in the semi-final though the team pulled off a victory, she cannot fail here and of course, Brunt knows how to make a comeback but her final delivery of the first over would tell otherwise. As Doolan took her for a boundary, Brunt wasn’t up for that.

Now, New Zealand, after losing their big gun, they cannot afford to lose any more and Aimee Watkins of all the batters knew it very well. Watkins came into this match after taking down India with her half-century in the semi-final. England needed to remove her before she got going and disappointed Brunt was ready for the battle this time.

Marsh once again provided the opening act. She unsettled Watkins with a couple of clever deliveries right before Brunt’s second over. A fuller yorker that swung was all she needed to embarrass Watkins as she watched the bails fall.

She almost removed Amy Satterthwaite with a couple of in-swingers but the latter was good to get her bat on time. Doolan and Satterthwaite shared a couple of singles in the over and that was all the runs permitted off Brunt’s over. She followed it up with a maiden in her 3rd over and New Zealand knew they went in trouble.

As the pressure began to mount, the shiner on Brunt eye added more to the menace and as a result, Doolan ended up losing the plot, tried a scoop that landed on Taylor’s hands. A couple of deliveries later, Rachel Priest lifted a short ball that found Brunt, a caught and bowled. A glee from Priest and dance from Brunt would tell you the rest of the story for the day.

From 23 for 4, New Zealand never really recovered and made only 86. In return, New Zealand bowlers bowled well but not up to the mark, especially, when you had only 86 to defend. England had all the time in the world and their only goal was to finish the match. They never really cared about playing it quick and made sure to get to the goal as they spent 17 overs. If it was some other night, the team would’ve spent a sleepless night planning better for the upcoming games. Of course, they did spend a sleepless night that day but to celebrate.

Fittingly enough, Claire Taylor, the player of the tournament, took the team to the World Cup by hitting a lofted shot over the mid-off to take the team home.

While England deserved to win that day, this match certainly has a special place in New Zealand’s book of choking. Something, they share in common with their men’s team.

I was forever lonely Ntini on racism in South Africa cricket