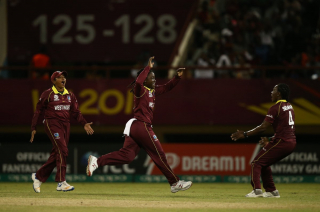 The hosts West Indies started their title defence on a high note as they defeated Bangladesh by 60 runs.

The defending champions had a poor outing with the bat after being asked to bat first by Bangladesh. The visitors did an outstanding job by restricting the team that comprises some of the world’s biggest hitters for just106. Stephanie Taylor scored 29 and Kycia Knight top-scored with 32. Jahanara Alam grabbed three wickets, Rumana Ahmed picked up two while Salma and Khatija had one apiece.

The target looked easy for Bangladesh, but West Indies and Dottin had other thoughts. Dottin’s accuracy destroyed the batters who had no clue. She bowled 22 deliveries, picked up five wickets and gave away just five runs. Earlier in the innings, it was the spell of Shakera Salmen who picked up two wickets added the pressure on Bangladesh. With no batter scoring more than eight runs, Bangladesh managed only 46 on board, giving the hosts a massive victory of 60 runs.