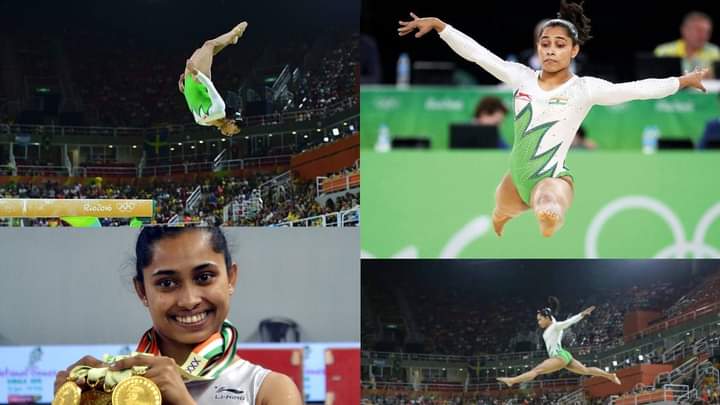 Still, 2016 was special. She became the first Indian gymnast to qualify for Rio Olympics, she was the first, of course, to get into final.

In the final, she wanted to give it all. She did. She tried Produnova. The most difficult form. Oh, that was her go-to. Putting her life at risk in front of the people was her go-to.

Now, Produnova involves front handspring, two front somersaults where you’ll be doing it in a tucking position and you will end up by standing at the end. The poor landing could damage her. Land on the neck, or the back or even a slight miss in the speed could end her career or a step further, could end her life. Oh, I find it difficult even to pronounce it. I cannot imagine what she had to go through, emotionally while performing. Of course, the closest most of us came when it comes to gymnastics is at the circus.

And, she landed safely that day. She was glad that she was alive, it was her personal best and most importantly, she defeated many world-class gymnasts. However, all that mattered to the Indians was the medal. Nobody knew what she had achieved. She came fourth in the Olympics and she did put her life at risk to achieve that. Oh, we should be proud.

That day, Dipa Karmakar had to fight many things, the worst of them was not putting her life out there but was the stupid questions from the journalist. Most of them were sexist. They asked her why she didn’t do two Produnovas. A few misread her thinking that she was a boxer. A few asked how she learnt Gymnastics coming from a tiny place. They didn’t know where she came from. They literally had no idea. One asked if she climbed trees to learn Gymnastics because she came from Agartala. She had to answer all of them. Polite. Calm. But it did hurt her. Of course, it would.
*
Post-Rio, her life did change. The government recognized her, Rajiv Gandhi Khel Ratna Award, and Padmashri followed. Oh, the injuries too. She needed corrective surgery for her knee in 2017. She needed rest for the whole year.

The comeback year 2018 was sweet to her. She became the first Indian to win at FIG Artistic Gymnastics World Challenge Cup, India’s first Gymnastics Gold in a Global event. She reached the final in the team event too.

A few months later, there you go, she had another knee surgery after a landing failure, days before 2018 Asia Cup. Another year went by, she came back for Artistic Gymnastics World Cup in Cottbus, Germany, won a bronze. Another injury to the knee occurred during the Baku Artistic Gymnastics World Cup right before the final. Dipa spent most of 2019 in rehab. She had to miss most of the Olympics qualifying tournaments.

Possibly, the only thing to come out of COVID-19 is that the postponement of Gymnastic World Cups, that acts as the qualifying tournaments for the Olympics. She is fully fit now Dipa Karmakar still has a chance of making it to the Olympics. She will be needing medals in both the World Cups to qualify. Of course, the dreams of Tokyo is almost over but she is not here to give up. She will not go on without a fight, at the least.

It’s never too late to dream- Entrepreneur Poornima opens up