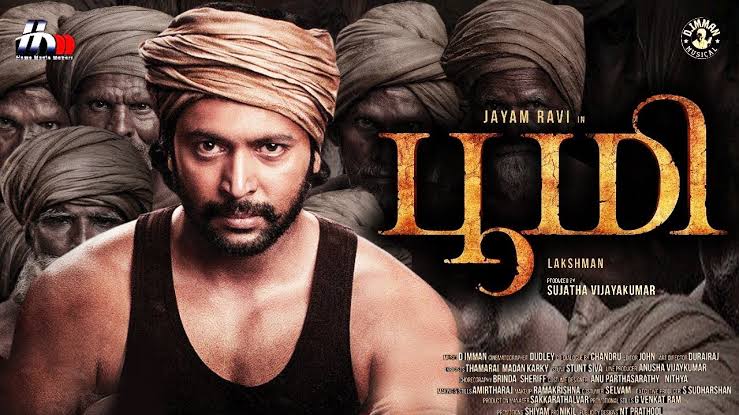 This is one sentence review for the film. In fact, insert Muhammad Sarim Akhtar, the famous meme man’s reaction too. I mean, what was everyone thinking when they were making this film?

Thankfully, they have released the film on Hotstar that one could really pause and use breaks.

Now, Jayam Ravi is one of the best actors in our industry and nobody knows what made him sign this film. Was he impressed with director Lakshman’s narration? or did he sign the project right after hearing the one-liner story?

I’m just wondering what it was because the plot of the film is something we have seen a million times. No, the treatment isn’t different too.

The film begins with the introduction of Bhoominathan, a NASA scientist, by some white news anchors who talks about how great he is in an unnecessary accented Tamil. They tell how he used to learn ‘A for Aperture of Radar’ as a kid instead of ‘A for Apple’. This is the 1st warning for us all to save ourselves.

Right before Ravi is all set to fly to Mars, he visits his native only to find out that farming is fast dying. So, he gives up his aim of going to Mars and creating a new world, stays back to save the Earth and farming from the corporate bodies. Yes, you guessed it right. The same formula, the same stereotypic corporate villain. He talks broken Tamil, he wears the suit. Ronit Roy is a better actor than this.

We must give an award or something for Nidhhi Agerwal to have two releases on the same day where she has pulled off that same loosu ponnu character but again, she looks like an alien to these concepts, probably from the Mars itself…

Guess that angle would have made the film even more interesting where they could have used the Koi.. Mil Gaya reference and who knows we might have had the connect with that alien than we had with the actors in the film.

The director did try to make us connect. He has slow-mo shots, close-up to Jayam Ravi’s eyes, sad background music and we do see linguistic nationalism mixed with Dravidian ideologies here and there. Instead of concentrating on all these, he could’ve concentrated more on research about the topic and the writing.

The only positive in the film is that it is well-intended but again, the timing of the release had made it worse. The farmers are fighting a real issue right now and I think this is just isn’t the right time for something like this. (The film was supposed to release in 2020 but due to coronavirus pandemic, the film had a direct OTT release recently.)

Wasn’t aware of the impact film would have on society: Sai Pallavi on Oor Iravu | Paava Kadhaigal

Saroj Khan passes away at 71