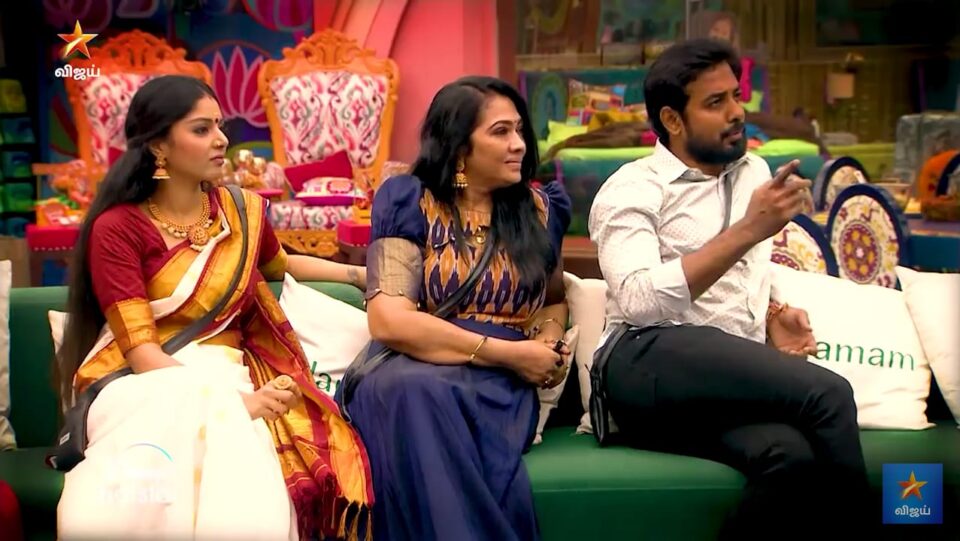 100th day of Bigg Boss Tamil Season 4 is celebrated with the rest of the contestants who evicted previously. They come to the house in an attempt to give meaning to their stay in the house on this day.

While Archana, Nisha, Ramesh and Rekha came to the house yesterday ans settled in, today, the house is decorated with the presence of rest of the other contestants. Velmurugan, Sanam, Suchithra, Aajeedh, Samyuktha join the contestants. They express their wishes and how much they missed seeing them.

They all play the game they once played like a tribute to the old days. They play thr gold mine task. They separate themselves into 3 for each teams. While Gaby is separating the team, she asked Aari’s suggestion to be in the team of his choice. Aari nods ok but doesn’t utter the word. Rio, who didn’t notice his nod, asked Aari to respond to the repeated ask. It agitated Aari a bit and he said he gave his response already and asked in an agitated tone if Rio hasn’t noticed it. Rio asked Aari why would the latter talked in such a manner when Rio wonders what he could’ve possibly done wrong. Then they talked it out.

After the gold mine task, they pick and read the gold card which says all the sweets and snacks name. Bigg Boss returns the same gratitude of having all the contestants again on the 100th day. He played clips of which made audiences laugh the most. Rio, Nisha have dominated the clipping with all their hearty jokes. Rio’s emotional to get the validation for his jokes.

Rekha got emotional while expressing her gratitude. She sounds disappointed for not played well enough even her daughter and her family sounded disappointed at her for not sharing her stories. Rekha shared her heartbreaking story for she let her father die on her watch and feels guilty ever since. She wanted to share the story but hid her sadness as she wanted to entertain. She seizes today and shares that story for her fellow contestants assuage her. Rio hugs her tight while Rekha’s crying. Rekha unintentionally being funny when she said, Rio is suffocating her.

Nisha, Archana share how much they are grateful to have got so many funny moments in the house. Nisha recalls playing the Scientist’s wife is her favorite moment. Bigg Boss calls Nisha and tells her I love You which makes Nisha go thrillingly crazy and then he said he pranked which made the crowd go crazy too.

5 more days to go for finale!