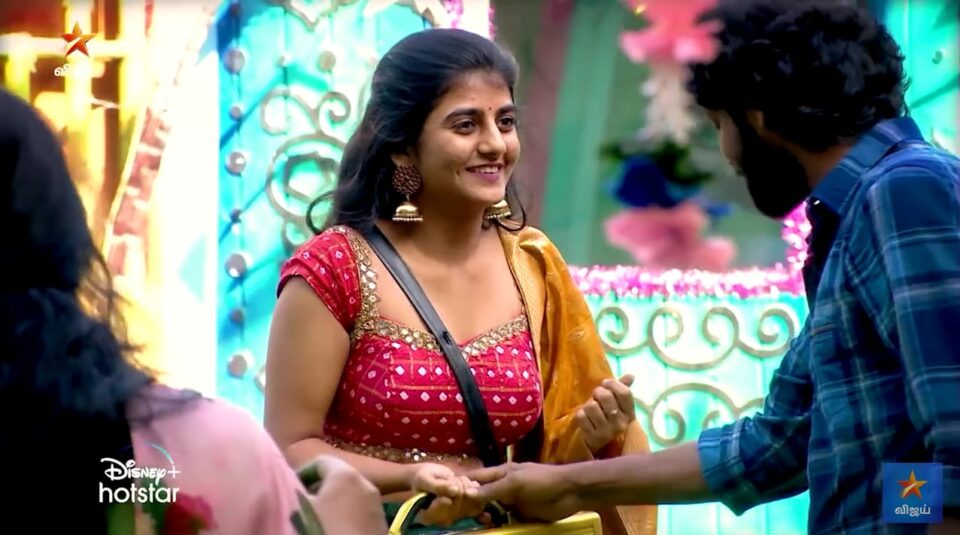 In turn of events, Gaby leaves the house with Rs. 5 lakhs as a gateway pass money. As part of Pongal festival celebration, contestants begin their day with the same enthusiasm like any other day. Ramya, Anitha and Bala decorate the entrance with colour kolams while Velmurugan sings a song to cheer them up.

They dress up for the day. They hear the news about the gateway money. They are told the amount gets changed at every buzzer of the day and it’s a take it or leave it option. At first, they are given Rs. 1 lakh. Nobody touches it. Then, the next buzzer brings Rs. 5 lakhs. After few mins of thought process, Gaby pics up the case. Rio tries to stop her and asks her if she has lost the confidence in herself. Gaby, very sensibly, says this doesn’t mean she thinks of her any less but she thinks it will come as her financial aid to take care of her mother. Rio counters it by saying he need the money too to take care of more than one people in his family too. Though this puts Gaby in a tough spot to help a friend or help herself. She decides practically and makes up her mind to leave with the money.

Rio, who has not moved towards the money until Gaby came, says he wants to get out too but doesn’t give a reason anymore than that to his love gang Nisha, Ramesh and Archana. In a way, they are proud of Gaby and bids her a heartfelt, teary goodbye.

Pongal celebration begins. Housemates split into 2 teams and prepares pongal delicacy. Sanam tastes them and names the winner. They do the custom Uriyadi game. In Ramya vs Ramesh, Ramya in blindfold hits the hanging pot in one try. She is filled with happiness to see herself win it and dances around. After that, Jithan Ramesh removes his blindfold and hits the hanging pot just to finish what he started.

And then, there is a slow cycling race. Aari vs Velmurugan, Aari wins it. Bigg Boss plays the clippings of the contestants’ outbursts in the house while various moments. They see it in an utmost silent. They seem gripped by what they saw. And Bigg Boss tells them this doesn’t define who they are but only a reflection of moment in haste. He advises them to leave all the conflicts inside the house. Anitha, who is grieving her father’s death, apologizes to the audiences who got irritated by her actions through the camera and ensures her family supports her state by understanding her without any hesitation.

3 more days to go for finale!