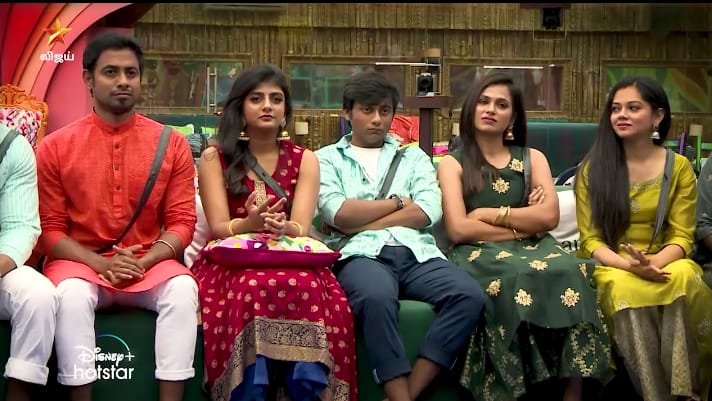 After wholesome spiced week in Bigg Boss Tamil 4, Kamal meets the contestants today and fills in his shoes as the representative of the public. He begins to start the dialogue since the first heated issue in the house, which is from Anitha – Suresh clash. Anitha utilized the stage she got to make an important statement. She pointed a regressive behaviour in the society and took Suresh’s rural act as an example to showcase. Suresh never mentioned before that he said what he said because he was doing an act until today Kamal fed him the idea. But Suresh’s intentions seem unpolluted as he did mention he has seen his mother’s struggle up close. Anitha gets the moral support she was looking for Kamal and also an advise to stick strong to her opinion if she feels right about it. He tells she needs not to cry for being right. Kamal didn’t fail to question others who didn’t stand Anitha too. Kamal also pointed out if Suresh is taking a backseat in his strategy for few weeks.

Kamal moves on the next pressed issue between Bala and Archana. Kamal also commented that if Archana’s strategy is love and then so be it. A fight which began because Bala slacked off his responsibility but they suppressed the fight by tagging sentimentality to it. Archana said she was never aware she was bothering Bala this much and Samyuktha made it clear to smoothen the issue. Though Bala fought with almost everyone in the house, Archana and Bala patched up in the end. Seeing that, Rio, who stood on Archana’s side, didn’t find the mind to make peace with Bala yet.
Aari, who spoke about the favoritism or groupism inside the house, also lauded by Kamal for his honesty. Kamal also points out there indeed seems like a politics going on inside the game. He made them understand how their methods of selecting best performers and the worst are very cluttered and confused and somewhat unfair.

Kamal finds some light hearted moments to shed light on Velmurugan’s plight in the middle of Archana-Bala fight. He talked about Sanam’s sportiveness turned tears in the game. He announces that Sanam is saved from the eviction. Kamal split the rest 10 into 5 pairs and saves each one from them. Rio, Ramesh, Anitha, Bala, Ramya got saved from this week’s eviction. Suresh, Aajeedh, Som, Aari and Nisha are still facing the eviction this week. It is to be noted that Aajeedh got the least votes last week and saved himself from last week’s eviction.

April 10, 2005: The day that could have changed women’s cricket in India