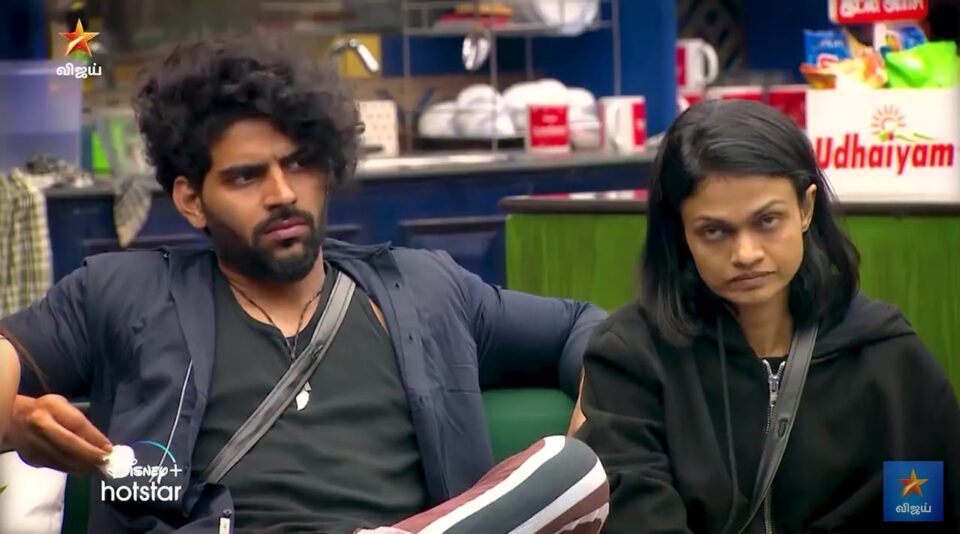 Last day of the week in the Bigg Boss house. There is nothing short for ruckus. Suchithra begins the morning task with a self-composed song dedicated for Ramya and Anitha those praise their virtues, accompanied by fun dances. Less interesting performers of this week’s Luxury task goes to the least performed teammates Ramya, Suchithra and Bala. Bala already is very sure of that Suchi and him are the ones gonna go to the glass door resting room outside. But still, he demands the other housemates to give valid points for their decision. Bala wasn’t co-operative during the clock task, he delayed it, he wasn’t taking part his responsibility with the house chores when others took care of it carefully with considering all their body pain. Bala is self-absorbed about only his problem and less concerned about how he his words or volume hurt others, especially Suchithra. Bala-Suchithra go to the resting room to spend the day.

Bala-Suchithra quarrel with each other in the room. It’s often Suchi suggests something which Bala denies any credibility tied to it. He seems like he is at the verge of his wit with her and loses his temper without any control. He hates her while Suchithra keeps trying to find a friend in him and at least with anyone in the house. She feels like she has earned so much hatred from her favorite people, from a show dear to her heart. Suchi also finds it annoying and feels judged when she is around Shivani but Shivani clearly doesn’t understand to reason with Suchi’s anger.

Rio-Nisha tries to sort out their friendship bond outside the house which often doesn’t suit to the house everyone here is an individual. Rio wants Nisha to be on her own, to be without his company. Contestants play Hyundai car launch task. As pairs, Photographers and Models, They take picture with highlighting the feature of the car. Aari-Samyuktha win it. Captaincy task happens. Archana, Samyutha, Gaby, Som, Rio, Aari play them. Between Aari – Rio , Rio wins it. He is the next week’s captain of the house. Bala-Suchi come out of the resting room to enjoy the feast sent by the Bigg Boss for dinner.