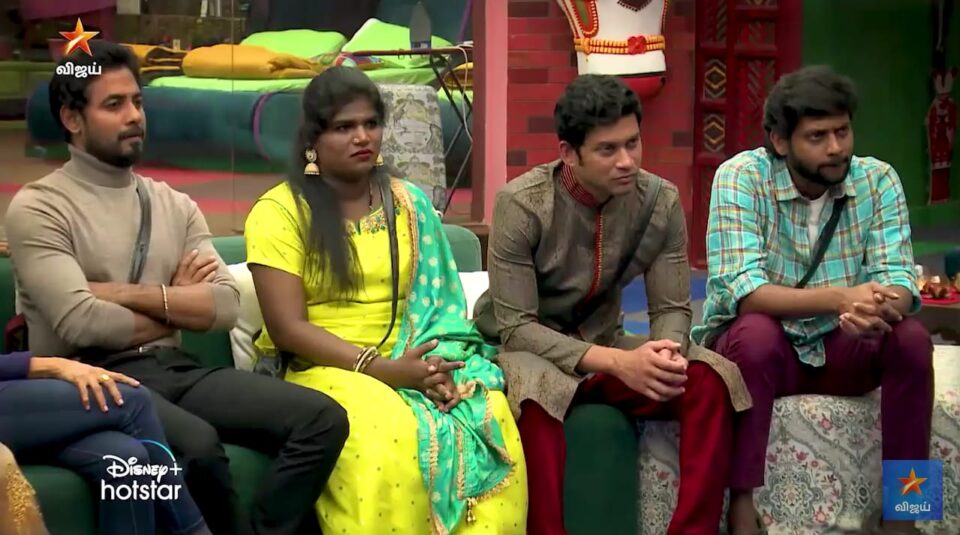 Bigg Boss Tamil season 4 nears it’s 50th day and the game gets tough. Kamal Hassan, the host, meets the contestants. We see the happenings of Friday when they heat the last night’s feast from Bigg Boss and eat. Archana and Som find themselves on a bit uneasy spots while taking about sharing their food. Som’s jokes are a little unamusing. Anitha-Aari talk it out the problems from last week when he was captain as Anitha wants to resolve any misunderstandings others have with her assuming that she leaves this week.

Saturday, some fun ways are waiting in the game’s disguise to poke problems among them for Kamal to witness. Kamal addresses Rio’s anger towards Bala over the issue of calling Bala-Shivani as a love affair, Bala’s insincerity towards his tasks and praised Gaby, Aari, Rio, Archana, Som, Samyuktha for their precision in their game. Kamal gives few tips to Bala that he could channel his smartness towards winning the game if only he plays by the rules. A fun game where contestants wear a cuckoo hat, pick a card of a person and tells a secret about them. It’s positively used like when Rio said Sanam got good sense of humor, also worked backward when Nisha pointed out that Anitha often tries to look sad and alone to grab attention of others when no one speaks to her.

When Kamal points out the someone called it a love affair between Bala-Shivani and that still remains a secret, Aari raised his hand voluntarily to confess it was him who did that in the confession room. Anitha and Bala talk during the break that how Aari is irresponsible of calling it a love affair without having a proper knowledge, without consulting with him which in turn degrades his game.\

Another set of game where the contestants gauge each other of who is the tough contestant and who is easy one. Nisha got the most votes for later for not individually states her opinion without a second thought, the second most is given to Jithan Ramesh. Bala got the most votes as the strong contestants. Kamal tips Nisha to bring out her best game to answer others who said she isn’t a tough contestant. Samyuktha, Archana, Suchithra, Anitha, Aari, Bala, Rio and Som are nominated for eviction this week. Aari and Rio are announced as saved. They give their thanks and regards for the people who vote for them, for believing in their game. Anitha and Suchithra got the most votes to get evicted from inside the house. Let’s see who’s leaving out of the Bigg Boss house this weekend.

I’ve never seen him play like that before: Inzamam about Sachin