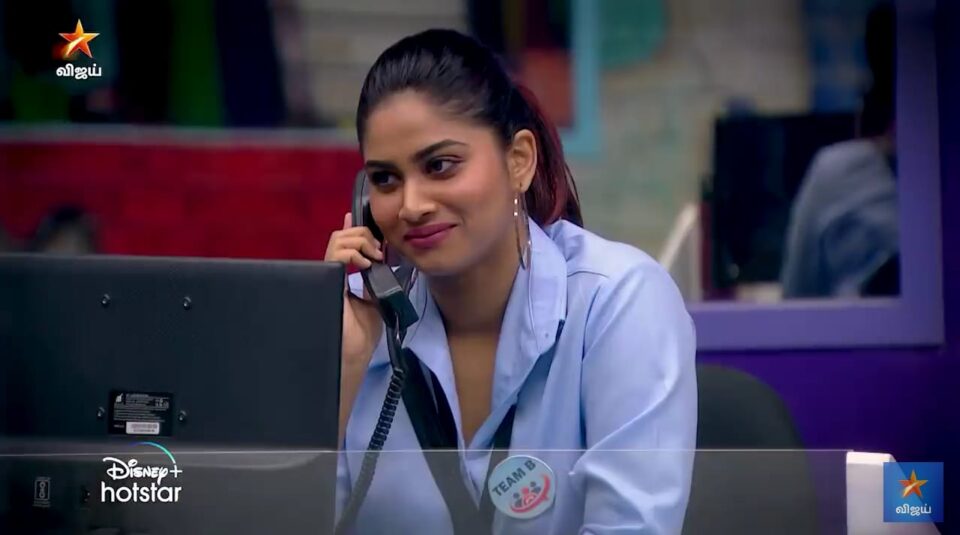 Gaby is hurt because she wanted to shed light on the incident where Bala talks one thing personally and submit opposite to his own view in front of others, especially on last Sunday with Kamal. Gaby is also hurt she was called a little girl by Bala which he says he said without appending any negative connotation but Gaby conceives that as a negative thing.

Bala-Samyuktha-Ramesh-Shivani have a couch talk about how Aari targets the women in the house and give them a title to degrade their game. Bala says Aari has to tackle him as he will never stop his arguments with him but the way Aari throws words at women contestants, he says, devalues their game. Ramya and Sanam was called one-sided and Biased by Aari when they put a point in a discussion, Samyuktha’s motherhood was discussed when he talked about her maturity, Shivani’s relationship with Bala is questioned, Nisha was called unfit to be in the house by Aari when Nisha wasn’t given her opinion and was uninformed about any issues.

Anitha-Nisha have the one-on-one Bigg Boss call center task. Nisha asks about Anitha desertion in the house, Anitha also counters for Nisha said in last Sunday to Kamal that Anitha seeks attentions which she says now she doesn’t. They have a less provoking call and Nisha gets nominated for the next week. Sanam gives her nominated board to Nisha as per instruction. Aari-Shivani have a one-on-one call. Shivani handles the call well and answers honestly. She denies when she is asked if the relationship with Bala is nothing but a friendship. She says Samyuktha for a good sportsmanship, Bala for an interesting game, Ramya for beins straightforward, Rio and herself as she respects her ambitions too.
When the call receivers come out to see what Archana’s discussion about for their insight, they hear Archana was dejected and said Shivani, Samyuktha, Bala are finalists. Shivani said it’s just her opinion and she never picked a fight for Archana saying Shivani isn’t part of top 8 contestants in previous week. Bala asks Archana’s insight discussion while dining and Archana explains how and what she mentioned. Sanam tries to smooth things between Bala and Rio which didn’t go as expected. They are still at each opposite poles.

Due to the Nivar cyclone situation, contestants are shifted to a safe place the night and came back on 54th day. They are tired and sleepy. As Som didn’t sleep properly last night, he takes permission from captain Rio and sleeps. Bala also asks for permission through vice captain Shivani and sleeps. Following him, Sanam and Anitha too asks for some more minutes to sleep for whom Rio already gave time to sleep for sometime. Rio says it cant continue as everyone will want to sleep during the day which is against the rules. He meant some words as jokes but it hurt Sanam as they sounded insulting. Sanam later says it was arrogant of Rio for which Rio tries to explain that he had to do as a captain. Nisha nods off a minute and the Bigg Boss dog barks. Rio is outside the house when it happened and comes inside to scold Nisha. Anitha says he gives special treatment to Nisha as he didn’t immediately go to check who would have slept.
Contestants nominate each other for best and least interesting performers. Bala, Ramya and Ramesh are chosen for next week’s captaincy task. Nisha, Aari and Rio are chose as least interesting performers for losing her temper and losing the topple card as well in the task, for reducing sportsmanship by screaming in the arguments without much justifications and for not keeping the harmony of the house as the captain respectively. Aajeedh’s name is also mentioned more times for not contributing properly to the household chores. Others save Nisha. Aari and Rio go to the resting room. They discuss how Bala’s arrogance is being fed by their attention and they want to stop it. Samyuktha-Bala think how the so-called individual players like Sanam, Anitha and Aari corners Samyuktha as a group and they are the real groupies. Bala mentioned last week Suchi got all of his heat which Shivani denies that Suchi got her votes because it’s for her game and it’s wrong to call Suchi as Bala’s lighting rod who gets his heat. But Bala says he only makes fun.

Shivani is impressive and she’s got her own mind to think. She is not influenced or intimidated by Bala and she is a real strong contender. Hamam sponsors a Brave and Safe game and asks contestants to learn and play silambam art from a learning video. Ramya and Anitha do it professionally and win it. Rio and Aari come out of resting room for the day. And the show is wrapped up for the day.

SO FINALLY IT IS BIGG BOSS SEASON 2