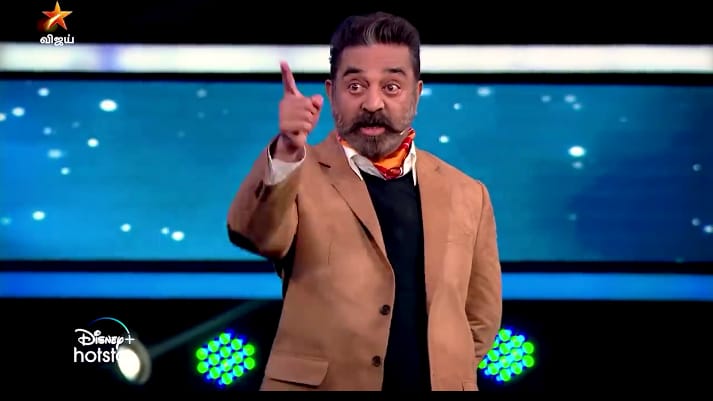 The first weekend of Bigg Boss Tamil season 4 is here. Kamal Hasan, the host of the show, talks to the contestants since the time they entered the house. We peep into the house to know what happened on Friday.

Sanam and Bala get off on a wrong foot due to a slight friction when Bala made a derogatory comment on the modeling organization that Sanam was part of. He commented that the organization wasn’t a registered on. Sanam took that criticism personally to her heart and got hurt as Bala’s comment didn’t acknowledge the struggles behind the people who were part of that organization. Bala explained that he didn’t personally criticize her or her efforts but only stated his opinions about such institution.

Nisha sends a heartwarming message separately to her husband to wish him on their wedding day. Day 6 begins and Kamal get to meet the contestants who are ready to be on their skin. Kamal addresses the personal stories shared by the contestants. He regarded Velmurugan’s story is not just his story but the representation of many migrants who come to the urban city in search of livelihood.

Kamal took the opportunity to remind people of the late CM Kamaraj’s Lunch scheme in government schools which is still a milestone one.

Kamal acknowledges Som’s stories and Sanam’s. He felt the need to point out the importance in Bala’s story. He insists not to focus on the darkness in his story but the light that comes out of it is Bala. Kamal shared Aari’s feelings and comforted him that he had also travelled in same boat. Kamal assures Aari that his mother would be proud of him for finding a job that even kept him busy from his own mother.

Kamal took the turns to listen to some of the frictions that was going on in the house, between Rekha and others. Rekha said she was fortunate for the housemates to point out her temper when dealing stuffs under pressure. She said she was making the changes. He appreciated Shivani for her singing and encouraged her to mingle more than she did in the house initially. Kamal lent his ears to hear the problem that’s kept pressing between Anitha and Suresh. Suresh was outspoken about how he mishandled his anger and now learning to control his temper by looking upto Rekha.

Anitha insisted that she tells her version of the story. And for that, Kamal advises them that it’s in their hands either finish the problem or let it grow. Kamal gives another chance to the contestants to show who won their hearts and who didn’t. They start with Sanam.

Earlier Sanam gave her hearts to Bala and Samyuktha and broken hearts to Rekha and Anitha. Today, She says she has the found the reason to swap her choices. Sanam makes up things with Rekha and smoothens rough edges with her and found the kind heart in Anitha since she has come into the house.

Sanam decides to give broken hearts to Bala and Samyuktha today. Bala and Sanam are in the same modelling profession. Bala’s derogatory comment on the organization she was part hurt her. She took the criticism personally when it wasn’t directed at her. Bala clarifies that he only stated his opinion but also accuses Sanam of portraying herself as a Victim here. Sanam disagrees with Bala and says she has no reason to seem like a victim even when she was one before at one point in her life. She says she doesn’t intend to gain sympathy.

Rio advises Anitha that she couldn’t be portrayed as a person who is cause of the problems unless she actually is. And Kamal appreciates Nisha and Sanam who sacrificed their comfort, their bed for Suresh to sleep on it due to his back problem. Suresh finds the moment to tell Kamal that Sanam has been sacrificing and letting go off things in the house in order to make everyone feel at home.

Kamal advises them not to take any criticism to their hearts when it’s not personally meant for them and advises them to smooth things if they wish or extend the problem as they wish. Sanam was hurt when Samyuktha didn’t let her to say her piece in a discussion and took the role of responsibility in revealing whose names are gonna be in eviction nominations next week. Sanam was irritated a bit for few minutes but regained herself to go back to the way she was with Samyuktha.

That’s all the time Kamal, the host, had today to listen the housemates. The problems don’t seem to get smoothened any time soon. And he has a lot to discuss tomorrow too.

Kamal reminds the people of veteran actor Manorama on this day when she parted from this world. He remembers her contribution to the Indian Cinema and one of the talented actors who is looked upto for her unmatchable skills.