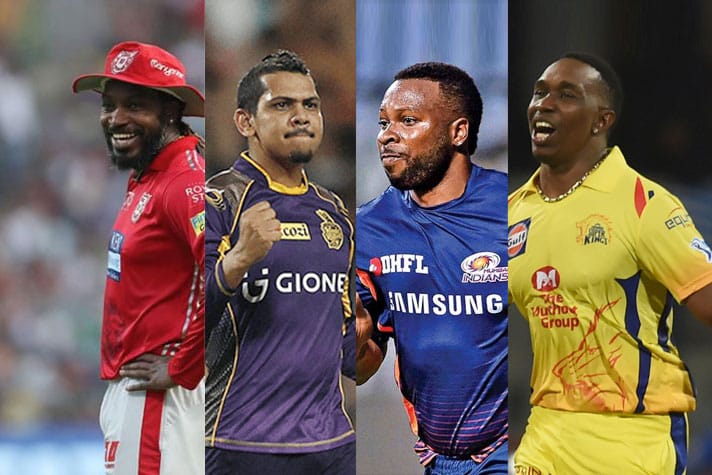 You cannot see any League being played without a player from this nation. The brand ambassadors of Franchise Cricket . Yes , guessed it right. West indies, recently changed to windies. IPL is the platform which have made many Caribbean Players as T20 Superstars. Let’s quickly jump into this year performances from them.

After winning the Carribbean Premier League without being defeated in the tournament, Pollard arrived at his second home. He has an unbelievable average of 64.75 with the Bat, scoring 259 runs in 15 matches, has hammered 22 sixers in it. Pollard’s best performance was against Punjab. He smashed 25 runs in the final over off K Gowtham. His captaincy skills are underrated so far. Windies skipper was asked to captain the side due to rohit’s injury. He did exceptionally well in that too.

With Rahul taking the gloves and Gayle to be back as a opener, chances to play in the starting eleven looked bleak. Punjab sprung a surprise by playing pooran instead of Universal Boss. He has been in sublime touch in CPL 2020. It all included 45 ball Ton. He didn’t got the best of starts. Punjab persisted with him, it proved to be a masterstroke. He has tonked 25 sixers. He was the third highest run scorer with 353 runs, next to Mayank & KL. He scored the fastest fifty of the season in just 17 balls in the match against SRH. He ended up with blistering 77 off 37 balls.

The Universe Boss was late to the party due to health issues. Once he got into the playing X1, his side looked invincible. He scored 299 runs in just 7 matches. It includes 3 fifties. He missed his 7th IPL century by one run in the match against RR. He has adapted quickly to No.3 spot by scoring a fifty in his very first match of the season.

Picked by a late replacement for Mitch Marsh, he warmed the bench for most of the season. He made immediate impact in his first match by taking 3/33 against RR. He anchored the shaky middle order. He closed out the games very comfortably. He has taken 14 wickets in 7 matches, with a impeccable bowling average of 16.64.

Dre Russ has been one of the vital cog of the KKR outfit. He had a very poor season regarding his standards. In the 10 matches, He scored 117 runs and picked up 6 wickets. It was evident that he wasn’t in the great form as he has hit only 9 sixes in total.

Like Russell, Narine had been big let off for kolkata knight riders. His weakness against shorter delivery has been identified. He scored 121 runs and taken 5 wickets in 10 matches. Except the one innings when he scored 64 against DC, he hasn’t played anything to his potential. His bowling action was again come in to radar. It may also have dented his performances to some extent.

His Salute style of celebration has impressed everyone in the world cup 2019. It was expected that he’ll provide some support to Shami & Co. He had a decent outing in his IPL debut. He picked up 2/24 Vs DC. His next match was a nightmare for any bowler. He conceded 30 runs in the penultimate over against RR. He was in and out of the side before Jordan replaced him.

The highest wicket taker in T20s, has been dealing with injuries for the past few seasons. It was no different this time around. He picked up only 6 Wickets in 6 matches. He didn’t batted much too.

Sachin, the man, the God!