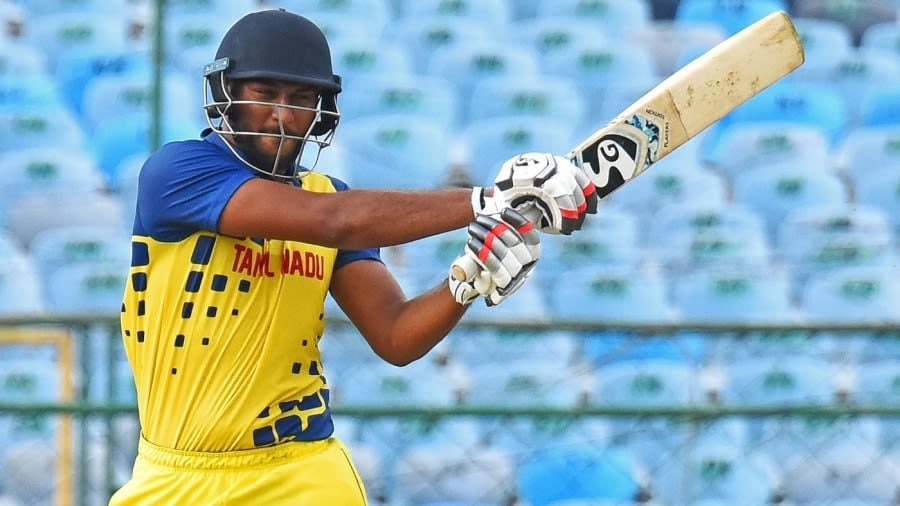 India literally is ruled by two things- Cricket and Cinema. The chance of escaping both is second to zero here. Especially, when you grow up in the 1990s and 2000s, Shahrukh Khan ruled every single state, beyond language. Lubna’s sister went a step forward here, forced Lubna to name her kid Shahrukh Khan. It’s crazy but the family really did go with the name. Poor kid. He began to make heads turn since then, for his name initially.

Hailing from Velacherry, cricket was always there for Shahrukh. His father, Masood, who currently is in the leather business, played in the local leagues and is a pillar of support for him. His younger brother Akram is also a cricketer.

Shahrukh began with tennis ball cricket just like every single cricketer here and began to take the game seriously during his under-13 days, when he was nine. He went to Don Bosco and then St Bede’s school and then was a part of St Bede’s cricket academy. Both the schools take the game very seriously and the training turned fruitful for Shahrukh.
**

2007/2008 Under-13 KSCA Inter-State Tournament featured some of the future stars, including N Jagadeesan and also Sanju Samson. Shahrukh opened the innings for Tamil Nadu, had 150 from 9 innings but was the 2nd leading wicket-taker of the tournament with 30 wickets to his name. On the other hand, Samson had 973 runs from 9 innings. This was Shahrukh’s first big performance that led to bigger things. He went on to represent the state in Vijay Merchant, the Under-16 Trophy which had stars like Shreyas Gopal, Hanuma Vihari. However, he underperformed, had only 102 runs and four wickets from his 5 matches.
**
It was 2012. Chennai Super Kings came up with the idea of Chennai Super Kings Junior in order to unearth young talents. Shahrukh won the player of the tournament award and also was the all-rounder of the tournament.

He slowly got into United Friends Cricket Club (years later, he moved to Grandslam and then Jolly Rovers Cricket Club) then played for South Zone U-23 tournament and other age cricket matches but had only a limited chance in most of them. He had wait for his big day. His 2nd appearance in Cooch Behar Trophy(2013/2014) changed everything. He made 624 runs and had 18 wickets. Certainly, he did make everyone take notice except for the Under-19 World Cup selectors. Nobody knew what had happened there and how he missed the bus for the India squad. It did put Shahrukh down mentally. Thankfully, he had his parents, his younger brother and his personal trainer with him. They made him regain his focus.

He made it to the squads of Tamil Nadu, went on to make his debut in List-A and T20 debut in 2014 but literally did nothing but fielding. TN had one of the strongest squads at that time and Shahrukh neither had an opportunity to bowl nor bat. If that was hurtful in a way, he made it to Ranji Squad in 2014 and had to wait till 2018 to get his first opportunity.

In 2014, he also played in the Red Bull Campus Cricket where he played for Hindustan College. Shahrukh ended as the man of the tournament, took his team to final.

2018 was a special year for Shahrukh. He had 325 runs with a strike-rate close to 142 in the TNPL tournament for Kovai Kings. This helped him to earn a couple of call-ups for the IPL trials, including for Mumbai Indians. However, he went unsold the next year but he knew things were slowly coming around. His debut in Ranji Trophy came in the same year against Kerala. He came in at number seven after witnessing the top-order collapse. Along with the then skipper Baba Indrajith, Shahrukh added an important partnership, scored an unbeaten 92 and added 34 more in the 2nd innings. Natarajan then took over, had 8 wickets in the match, gave Tamil Nadu a massive win by 151 runs. He played three more matches, ended with 230 runs in that season.

In the same year, he cemented his spot in the limited-overs game for Tamil Nadu. He got into the team as a cover for Vijay who was with Somerset at that time and when Sundar suffered an injury, Shahrukh grabbed the opportunity.

Tamil Nadu needed 262 against Rajasthan. After 75 from Mukund and a good half-century from Baba Aparajith, the team was needing a good amount of runs. Enter Shahrukh. Along with Dinesh Karthik, he added a century-run partnership to take the team home. A few matches later, he once again joined with Dinesh Karthik to add another century partnership. This time, it was, even more, a pressure-cooker situation. Dinesh Karthik made 97 and Shahrukh scored 69* to take the team to 286. To add more to his run-fest, he was the star performer in the semi-final against Gujarat. He scored 59* to take Tamil Nadu home. He ended with 244 runs from 8 innings.

Dinesh Karthik had a lot to do with his growth too. He took him under his wing, groomed him to be the finisher. In the practice session, he would stand behind him, would provide situations to make Shahrukh bat accordingly. Murugan Ashwin would bowl to him in nets in order to groom him to face spinners as Shahrukh struggled against spinners while he was able to take away the pacers with ease.

While everything was going well, 2020 saw a bit of slump as he picked up a finger injury which took more than three months to heal. Soon, the pandemic took over.

Shahrukh spirited on streets and lifted weights at home and once things got eased, he went to his personal trainer’s home for the training. He did put on some weight, built muscles also learnt new shots which came in handy this season.

2021 Syed Mushtaq Ali Trophy belonged to Tamil Nadu. The team remained unbeaten throughout the season. When Jagadeesan dominated with the bat, it was Shahrukh who helped the team to win important matches when the team had lost early wickets. He made 88 runs from 4 innings with a strike-rate of 220.

He had managed to carry on with the form in the ongoing Vijay Hazare Trophy where he has 192 runs from 4 innings with three fifties to his name. His best knock probably is 67* from 77 deliveries against Madhya Pradesh where he almost took his team home by batting with the tail-enders. Tamil Nadu lost that match in the final over, fell short of 14 runs.

In between all these, IPL Auction happened. When Punjab Kings grabbed him for INR 5.25 crores, he was with his teammates on the bus. Dinesh Karthik shared the video of the auction and every single person in the team was genuinely happy for him and it was definitely one of the heart-warming videos.

Right now, Shahrukh is in form of his life and is not bothered about the price tag. He is looking forward to playing the game well and is very keen to meet Chris Gayle, play alongside KL Rahul.