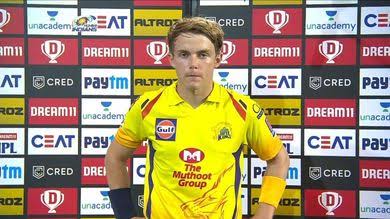 IPL is finally here and in the first match of the tournament, the last year’s finalists Mumbai Indians and Chennai Super Kings locked horns.

MI scored 162 runs after being asked to bat first, thanks to Saurabh Tiwary’s cameo. For CSK, Piyush Chawla began the attack by removing Rohit Sharma. Sam Curran followed it up by dismissing Quinton De Kock and the wicket began to fell for MI who once looked good for a big total.

In return, CSK began poorly by losing both the openers but they had Faf du Plessis and Ambati Rayudu almost taking their team home. In the end, the match went down to the distance. CSK needed 27 from 17. Dhoni decided to send Sam Curran in instead of Jadhav or himself.

Curran smashed 2 sixes and four before falling to Bumrah. However, the match was almost over when he got out.

Talking about his promotion up the order, Curran said that he was surprised and called MS Dhoni a genius.

‘Very different. I have been used to the bubble with the England team. But you are used to seeing big crowds in IPL, so it was different. I haven’t met a lot of the guys, came in a day before, and was straight on the bus today. That was a good thing.

‘I was very surprised that I went in. He (Dhoni) is a genius and thought something (about sending me before himself). We targeted that over (18th) and sometimes it comes off and sometimes it doesn’t,’ Curran said at the post-match presentation ceremony.

CSK will now take on RR in their 2nd match on 22nd September.