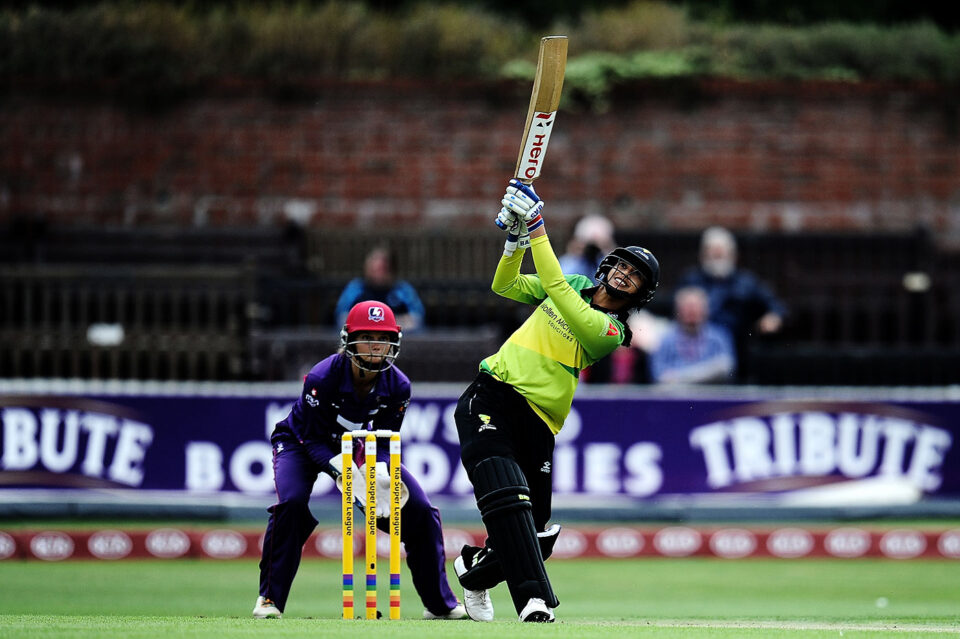 2018 is the biggest year in Smriti Mandhana’s career so far. She also broke many records, created new milestones in the year.

One of them was becoming the first Indian to play in the Kia Super League. She completely ruled the season while playing for the Western Storm.

On July 29th 2018, Western Storm took on Loughborough Lightning. The match was reduced to six-overs a side due to rain.

Mandhana knew she had to go big on the day and the players knew there was something special when she began her innings with a straight-six. You don’t give players like Mandhana a second chance, right?
Lightning did that mistake when they dropped her on seven. There is no looking back at all. She saw a short ball off Devine, She didn’t pull it this time. She goes over the covers and for a moment, the fielder thought that she had a chance but the ball was just over her, going for a six. Maybe, the fielder lost the ball in the bad light, you never know.

After driving Gunn for a four, she took on Gordon for a beautiful cover drive as Storm brought up their fifty. She then matched Priest by hitting a six over long-on off Elwiss.

Then she beautifully cleared the long-off with Stephanie Taylor watching it from the other end. After that six, she shared a lighter moment on the field. Taylor had to remind her about her fifty. With all smiles, she lifted the bat for the crowd. Then she a single to finish her innings by 52. Mandhana lost two of her partners-Priest and Knight before getting in touch with Taylor.

Maybe, Mandhana was taking revenge for what Devine did to the Indian team years ago when she scored the 50 off 18 deliveries for the first time and ended up with 22-ball 70. Of course, that knock still hurts but to see Mandhana going against Devine this way, did feel like revenge. A bit.

Oh, Devine did not stop there she also came back to score 21-ball 46* but couldn’t get her team through.

Report of the match-
Batting first, both Rachel Priest and Smriti Mandhana went berserk. While Priest managed to score 13-ball 25 including three sixes, Mandhana continued to dominate, scoring joint-fastest T20 fifty(50 off 18 deliveries). She made 52* off 19 deliveries in that match. Storm ended up scoring 85 in six overs. In return, despite the best efforts of Sophie Devine who scored an unbeaten 21-ball 46, Lightning fell before the Storm by 18 runs.