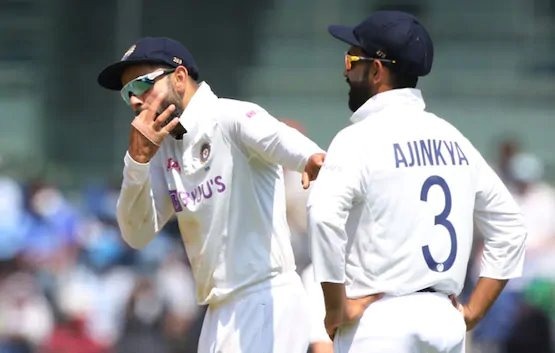 I’ve witnessed all formats live from the stadium and Tests usually draw a fewer crowd than the other two formats. This time it was different. Probably, because the game was getting back to Chennai after a while, the crowd felt more special. There was only fifty per cent but it felt more. The decibel was always there. Run. Defence. Milestone. Boundary. Everything. The crowd was enjoying along with cricketers. Then there was Virat Kohli who played the perfect DJ and controlled the crowd.

The craziness for the game was just too much that the people were ready to spend hours before the counter to get their tickets. The first day was worse with Police failing to control the whole crowd. The second day was better and it did take hours to get tickets.

Becoming friends with the ones who are next to you at the stadium is mandatory. Cricket helps you to bond and you do go like, “Innaaa thala ipdi pandraanunga”. It gets better when India does well and this Test was just too much to ask for.

Rohit Sharma might turn the main antagonist in a few days as we wait for yet another season of IPL but that day, he was our leader, superstar and everything and Rohit did what he usually does, got the crowd going with an excellent show. Nobody knows how he made the game look so easy when literally everyone was struggling. The man might have scored multiple tons and double-tons, this knock was certainly one of a kind. The crowd knew it and for everything he did, there was at least applause.

Rahane, on other hand, did what he does the best. He slowly kept the scoreboard ticking and played the perfect second fiddle. He had his fair share of moments too.

While Rohit took the centre stage on Day 1, Pant welcomed the crowd well on Day 2. A few fours and sixes, the crowd began to go berserk. There were people who called their loved ones, to talk about what was happening there and every single moment was cherished.

After India got out, Virat Kohli took over the DJ role, asked fans to whistle (Whistle Podu) and did it to perfection. Nobody loves the crowd more than he does. He knows how to keep them engaged, be it through his batting or with something like this on the field. The Crowd chanted for every single player and when the local boy took over, they went unbelievable. Ashwin increased the decibel every time he took the ball. He made it memorable by picking up five wickets.

The crowd didn’t leave anyone in the team feel like an outsider. There was the appreciation for debutant Axar Patel and there was a huge roar when Kuldeep Yadav was first introduced. The 26YO was in the bio-bubble for a while now and had to wait for a long time to get the ball in his hand. He was rightly appreciated for the same.

When India came back to bat, Pujara’s drive gathered more noise than any other shot by the Indian players that day.

The Day 3 totally belonged to Ashwin and every single time, he did something, the crowd got behind him. Kohli treated the fans with some pretty shots but Ashwin was the man of the moment. He took away all the spotlight and stood by his words. The best moment, however, went to Siraj. He certainly wouldn’t have expected that crowd would go crazy every time he played solid defence. It certainly would’ve been new to him but for the crowd, it meant so much. Ashwin’s ton meant so much. They wanted him to survive that day. Siraj, being the closest spectator, had the best reaction to Ashwin’s ton and then went on to thank the crowd by smashing a couple of sixes.

The next day, it was all about Axar Patel. Every time, he got the wicket, the team got behind him and Joe Root’s dismissal got the crowd going. When Stokes got out, I don’t even have to mention how crazy the crowd went when the team got out. Everything meant so much to them. Of course, it was all magical.

Rishabh Pant is young but he already has won millions of heart with his brilliance with the bat and keeping. He was the star with both and he rightly got cheers from the crowd for whatever he did. Of course, that moment with Stokes kept the crowd on their feet.

While the crowd had enough moments to celebrate the win and everything, they didn’t fail to acknowledge England’s efforts. Every single four was appreciated; Ben Foakes had a round of applause when he carried the bat. Every boundary save was acknowledged and Broad had the loudest cheer when he dived to save the boundary. Ben Stokes entertained the crowd by walking with hands and it did make a few jaw drop.

The best moment was probably making Ben Foakes feel at home when the crowd sang “Happy Birthday Ben Foakes”. Ben Stokes wanted the crowd to increase the decibel and the crowd responded as well.

People did enjoy the tiny show Moeen Ali had for the crowd in the end. It was a perfect ending.

Apart from the match, asking Valimai update to Moeen Ali was one of the memorable moments with no doubts. It looks like he had asked Ashwin what it was all about(from Ashwin’s video).

Then there were Birthday wishes for Mayank Agarwal who wasn’t even playing today. The other was when reserve players walked out for the practice, the crowd was way too excited to see them. Hardik Pandya had the loudest cheer followed by KL Rahul.

I know I have missed a few good moments but on the whole, this Test gave the fans just too much to remember and will be one of the best games I’ve ever witnessed in the stadium.

Mind you, a few members of the team faced racist slur from the crowd a couple of Tests ago while they were on tour.

As I write this, I cannot stop thinking about the Indian women’s team who are yet to get back to the game. Hopefully, they will be back in action in a few days against South Africa. Again, Hopefully.

N Srinivasan on how he saved Dhoni’s captaincy

Kohli is a demerit point away from suspension!