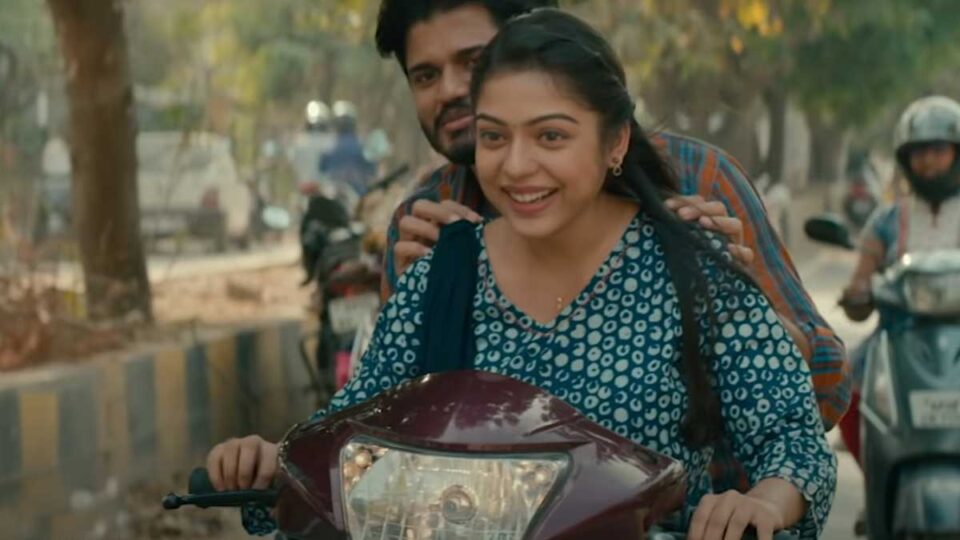 Debut filmmaker Vinod Anantoju makes a sweet film that has more than one fine moment to define its brilliance. Anand Devarakonda and Varsha Bollamma play the leads and the story revolves the people in their surroundings too. One of the great things about Middle Class Melodies is that every character has its own definition. No one is there to fill the ambience. The film starts by humoring us about the practices people hold dear to them due to their blind faith to the auspiciousness. There are characters believe in the horoscope, in auspicious times and there travel through few fine moments to introspect themselves of their senseless beliefs.
Anand tries to fit it in to this lyrical drama as an ambitious young man who is passionate about his mother’s RecipeTM Bombay Chutney and wishes to make it worth through a restaurant business idea. But he often comes off as an actor who waits for his cue to go ahead. Varsha is expressive and bubbly. She has her own high points when she says “Why no one asks what I like before making a decision for me?” with a deep, sad-drenched, look. She is brilliant. Director Vinod does an earthy task of depicting the accurate lives of lower middle classes at their households. There are many fine moments those are melodious and hit the right note. When the intimacy is captured between Anand’s parents, when they give Anand their nested savings for his hotel dream, the film is sensitive and understanding. When the milkman Anjaiah is pained as his savings are in the drain, when he gets the help at the right moment for his granddaughter’s education to continue, when he feels the gratitude, when he gives his shoulder to the one in grief who caused him hurt. The film’s moderately rich with such moments.
There are little stories inside the film they have their own beautiful beginnings and endings like the one between Gopal and Gowthami. It’s incredible to see when some sharp moments are conveyed visually or in just one line that tells the whole story in depth. Like when Gowthami’s friend asks her if Gopal, who has a strong belief in horoscope, said if he didn’t like her, she simply says that “he didn’t like my date of birth”. Her drunkard father, the guy who stalks and pesters her to marry him, the place where she works, the depiction conveys beautifully the plight without demanding much time from the viewers.
Anand is tested in his attempt to excel but he just graces the final line. There are little anthropological stories that poignantly blends with its geography for an accurate depictions. The film tries hard to keep us invested in Anand’s journey to his dream. He gets his Eureka! moment like when a mango falls from the tree on his head, like Newton’s Apple moment. But there are not enough high moments to cheer for the protagonist. Varsha as the feeble Sandhya earns the sympathy and support of us when she exerts her sadness and when she overcomes weight of patriarchy in her house with her father. We couldn’t cheer for them as those moments only touch and reveal the problems and left as a loose thread without a sensitive closure. Still, I’m happy for films such as Middle Class Melodies as they wouldn’t have found such clout to receive wide constructive criticisms if not for the OTT blessing in disguise. This melody is soothing enough.

Prabhas is my 3 AM friend: Anushka Shetty

Do it for yourself, not for the gram: Shraddha Srinath’s inspiring message for fitness!