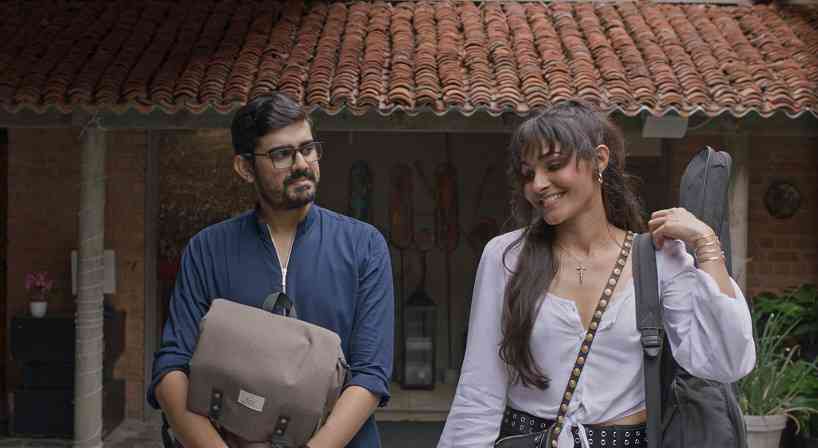 It’s refreshing to see some of the bright minds in Kollywood today to put together something as beautiful and enjoyable as Putham Pudhu Kaalai. Anthology genre like films are not so common yet to Tamil Audience and Sillu Karuppatti (2019) took everyone by surprise. It’s a warm start that can be brilliantly explored more and more. OTT has been as a bliss to the writers and directors where they can boundlessly experiment with themselves. There are few filmmakers in this film have already made a style for themselves for which the audience got used to it by now.

Sudha Kongara’s Ilamai Idho Idho, starring Jayaram, Urvashi, Kalidas Jayaram and Kalyani Priyadarshan, is something quite a cute, toned down way of romance from what we have witnessed in Sudha’s movies  like in Irudhi Suttru (2016), Drohi (2010). The romance is loud in her films and infect you with some energy. Here as well, Sudha has preserved the infectious energy but in a slightly more cute way. The romance is still loud and far more evolving. The younger-selfs of Jayaram and Urvashi are played by Kalidas and Kalyani, which takes us into their complete enthusiasm with which they find their love. It falls flat and straightforward when it finds its conclusion but it still marvelously works.

Gautam Vasudeva Menon’s Avarun Naanum Avalum Naanum is so poignant that it surprises with even a little visual language. MS Bhaskar and Ritu Varma play the estranged grandfather and granddaughter who find the opportunity to rekindle their lost compassion to each other. As Ritu texts her sister who lives abroad when she reaches her granddad’s place that the man is fit and doesn’t need anyone to look after him, he doesn’t even need anyone to give him company, MS Bhaskar cuts mangoes into slices with such a warmth to make some snack for his granddaughter, who he hasn’t seen in ages, who Ritu thought he doesn’t look forward for a company. It’s a slight disappointment to see that the dialogues aren’t as sharp as the visual language. I felt it was a bit unfair for some blunt dialogues shadow and undermine what the two good actors on the screen are all about.

Coffee Anyone? By Suhasini Maniratnam felt the need to make this film which somehow come off as a patronizing subject. An unconscious, bedridden mother who has only got the caring husband by her side while her 3 daughters, who have a lot going on in their own lives, find their time to come meet her. There are the bits when the husband decides to keep his ill wife at home under his care for nature surround her, when he tells the hospitals only hurt his wife and not make her any better, when Anu Hasan validates herself a positive result on her pregnancy through a lot of painful medical procedures as a miraculous event, When Suhasini blames herself for her little son’s dyslexia because she was a working mother, When Shruthi Hasan resents to talk to her sick mother as she was treated as a neglected child but then it’s her who calls her unconscious mother to tell her that she has done a great job as a mother. It’s what even the parents who did wrong by their children want to her as well and doesn’t like when a mistake is pointed out. This part of the series feels patronizing all this old values in the society and struggles to find its balance to seem appealing at the end.

You know what they say, always save the best for the last. Reunion and Miracle promise a fulfilling wind up. Minsara Kanavu, Sarvam Thaala Mayam, Kandukondaen Kandukondaen prove that Director Rajiv Menon’s love for music. Here is where the struggle meets the art and kindle an old love. While the lockdown could be a bliss for some, it’s cruel for some others. Withdrawing from an addiction, from an age old habit isn’t easy especially with all the judging eyes drilling one down. I loved when Leela asks about if Andrea gets the drinks for free from the bar she works and yearns to sip one for herself. Gurucharan and Leela takes care of Andrea’s cocaine withdrawal just as how they do if she has fallen ill from a common fever. It’s heartwarmingly done and importantly it inculcates how not to forget the kindness. There is nothing but kindness and love is validated here. Not the jobs, not the economical status, not the habits and just kindness.

To this wonderful anthology series which is tied to each other by COVID-19, Miracle by Karthick Subbaraj is a perfect, smashing wind up. It’s fun, coherent and treat its audience with the smartness they behold. You see a single room house which is not much decorated or furnished with “essential” elements, but you see an expensive headphones hanged on the nylon rope which Bobby Simha and his roommate/partner in crime hang their lungis and other clothes. A product doesn’t seem to have belonged to its place, gives away a detail that it could be stolen. Karthik doesn’t really want to spoon feed the audience. He is audaciously brilliant to guess that his audience know to follow what they see on the screen. Its injected comedy works very well and just you just want to laud the filmmaker’s genius. And as always, it’s signature of Karthik to have a sweet, fun twist at the end that you want to devour its skillfully created parts. All you need to establish a struggling filmmaker who just found his joy to complete his movie is, you just get a one wide back shot of a man in front of a movie poster who clutches handful of money in both hands.
Putham Pudhu Kaalai, a charming anthology film, that’s tied together by COVID-19, with a wonderful mellowing music and a vivid cinematography, is quite an eyeful.

There is something about Veda Krishnamurthy