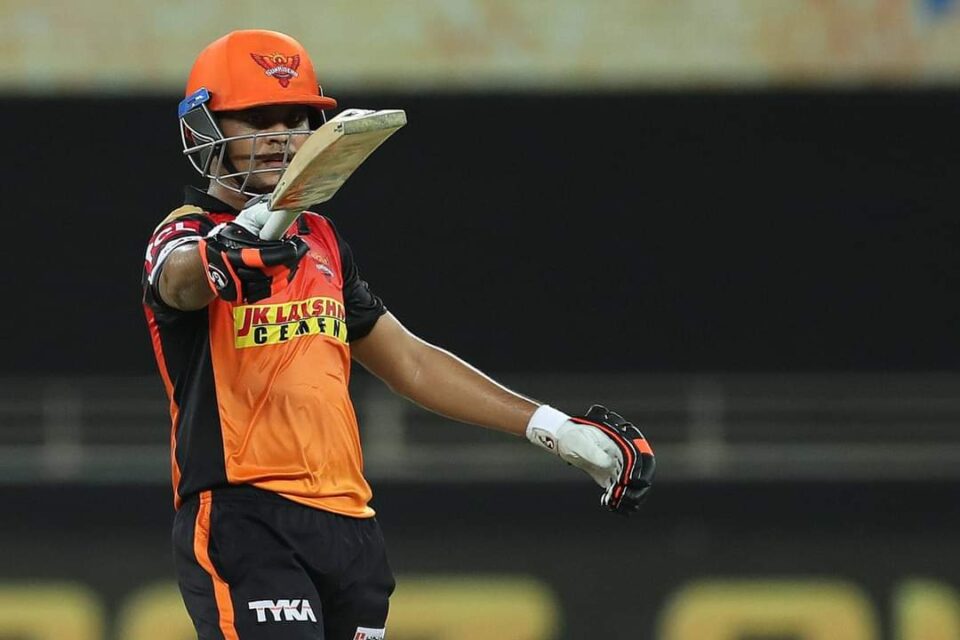 2011 World Cup was special. MS Dhoni finished it off in style, India lifted the World Cup, the players carried Sachin Tendulkar on their shoulders and not only that, the moment did inspire millions to pick up the bat professionally. Priyam Garg was one of them.

He used to play the game just like everyone else when he was young, but the World Cup’s influence was something else. He fell in love with Sachin. The then 11-year-old would skip classes, run to nearby Pan shop to catch the Indian matches, watched Sachin Tendulkar. The kid began to dream that day.

Cricket is an expensive sport. Not everyone can afford it, but dreaming is always free, right?

Coming from a small village near Meerut, the family of seven had financial restrictions. They couldn’t afford Television, and cricket training was out of the question. His father wanted him to study instead of picking up the bat, and it was tough to convince him initially.

But sometimes, dreams win. In Garg’s case, it did. Garg’s talent was spotted by his uncle who suggested his name to Rastogi, a Meerut-based coach.
Now, it is pretty normal that the kids look up local heroes and for Garg, it was Bhuvneshwar Kumar and Praveen Kumar. He wanted to become a bowler too. Of course, you can add his fear of facing the leather ball as one of the reasons.

Rastogi, when saw him bat, he knew he was different and turned him into a batter. He also went on to convince Garg Senior to let him train.

Garg’s family suffered a loss in business, and the financial restrictions forced the family to borrow money from a friend to support the training.

Garg senior then took up odd jobs. He sold milk, newspaper, loaded trucks, drove school van for children. While doing all these, he also made sure to drive Garg from his village to his cricket coaching centre and drove him back in the evening. Since the journey was almost 40kms, Garg had no other way to return and would train until his father arrived. Somedays, he would take buses, but again, it is not feasible every day. He would pack Parathas daily for his lunch and would train as much as possible.

In 2012, he almost left the game as he was mentally down. It was the year his mother passed away. However, his father made sure that he trained. Soon, his father began a small business, ran his own school buses. Years later, Garg’s siblings are all graduated from different departments.

Garg then went on to play for Uttar Pradesh in the Under-14 tournament when he was just 12. He scored a fifty during one of his matches. When he was 15, Bhuveshwar Kumar returned to train with the coach Rastogi. Kumar bowled to him, and the youngster took him on. He was even standing well outside his crease and showed no fear.

A year later, there was a selection for the under-19 team. 16-year-old Garg tried it but couldn’t get through. He was nervous, his form was poor at that time as well. He knew he had the time and practised harder.

In the same year, he made it to the Uttar Pradesh squad, thanks to his brilliant performance in the KSCA Invitational tournament in Bengaluru in 2018. He answered the call with a brilliant ton against Goa.

Slowly, he became a regular in the team and was part of India’s emerging team as well. In the Under-19 tour of England, he ended up scoring 289 runs from 6 matches at an average of 57.80.

Playing alongside experienced cricketers helped Garg to grow. One of the cricketers who took him under his wing was Suresh Raina. When Garg entered the UP team, Raina was the captain. He made sure that Garg felt comfortable. He went on to share his stories and struggle to motivate Garg and of course, that left a huge mark in his life. He ended that Ranji Trophy season with 814 runs from 10 matches at an average of 67.83. In 2019/2020 Vijay Hazare Trophy, he had 287 runs from his 6 matches.

What followed was the big IPL auction. In 2020, Garg led India in the under-19 World Cup where the team ended up as the runners up. Under Rahul Dravid’s wing, Garg learnt how to keep his hunger for runs growing. Apart from Sachin, he also admires the patience of Pujara.